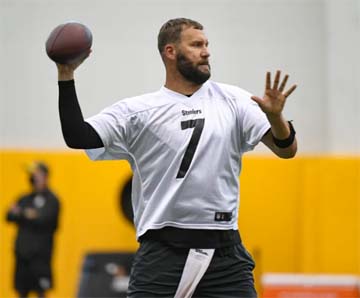 Ben’s arm bouncing back fast: When Ben Roethlisberger takes the field against the New York Giants on Sept. 14 at MetLife Stadium, it will almost be a year to the date that he last played in a game. Roethlisberger left the Steelers-Seahawks Sept. 15 game last season with an elbow injury that sidelined him for the year and forced him to have surgery.

But he has come back strong, maybe even stronger than ever. Roethlisberger has been throwing consistently in practice, even practicing three consecutive days last week, something that hasn’t been the norm for him.

“It’s felt really good,” said Roethlisberger. “For the last handful of years, we did the same routine with a full day, half day, off day. I even went three days in a row last week and it’s been feeling really good. I definitely need to give it some time to rest, that one day off every so often, out of general fatigue. But it’s amazing how fast it bounces back and feels great the next day.

“It wasn’t like I wasn’t able to make the throws, it was the pain and discomfort I’d feel or the next day. I feel really good making some of the deeper down-the-field throws. One of the practices last week I wasn’t able to step into it and I threw a go-route down the sideline. I let go of it and it felt short and it ended up making it there in stride. I was surprised at how my arm strength has come back, and maybe a little better than it was before.”

Offensive coordinator Randy Fichtner agrees that Roethlisberger’s arm looks strong and is keeping a close eye on him, including watching the extra time he spends throwing to guys after practice and so forth.

“I go up to him after practice and ask how he feels,” said Fichtner. “I like the idea from script standpoint, he hasn’t shied away from any deep opportunities. And we’ve taken several.

“The off day, half day have lined up perfectly for him to have time off and not miss work. Some of that hasn’t occurred because the off days are at the right time, right moment. We have to watch the extra reps that occur between the lines outside of a period. When we come off the field, I point blank ask how he feels.”

Shaking the nerves: He is heading into his 17th season, but Ben Roethlisberger admits there is a sense of nervous excitement when he is out on the field right now, a feeling that comes from missing almost the entire 2019 season and preparing to get back out there this year.

“When we have done some two-minute drills against the defense I have felt like jelly-type legs, nervous on the field, which I never felt before or for a long time,” said Roethlisberger. “I know if I am nervous out there on the practice field right now, I know the game is going to be a different feeling.”

Those nerves are something offensive coordinator Randy Fichtner thinks will drive Roethlisberger. Fichtner said when the team had an evening practice last Saturday, which included pregame introductions and the like, that he saw the excitement and nervousness in his quarterback.

“I am always going to be nervous for our guys, because I know how much they put into it, and in this case how much he put into getting back to it,” said Fichtner. “What is interesting is we had that first evening practice. It was a practice. I remember him coming off after the first period and he said my knees are shaking, and there are only just media in the stands. We went through that process of pregame. It was at night. You would expect that with how much he cares and put into getting back. Hence those feelings are going to happen. If you don’t have some jitters, you are probably in the wrong business. It usually disappears after play one.”

The other thing that will likely go away after play one, or hopefully a few more, is Roethlisberger getting the first hit after almost a year. Not that he wants hit, but he has been talking to guys on defense trying to convince them to just ‘bump’ him a little to get him ready.

“That is going to be the last hurdle, getting hit,” said Roethlisberger. “I try to talk to T.J. (Watt) and those guys and ask them to give me little bumps, but no one will do it. Getting hit and calming the nerves are going to be big ones for me.”

There is going to be one thing Roethlisberger will miss this year, and that is the atmosphere if there are no fans or a limited number of fans at Heinz Field this year.

“It’s going to be different,” said Roethlisberger. “We had our practice with the fake crowd noise. I’d be lying if I didn’t say I wasn’t excited to run out of the tunnel after last year at Heinz Field. There is nothing better, and I will never be able to put it into words and describe to someone that hasn’t been able to do it what it’s like to run out in that stadium, here at home with the fans screaming, going nuts, the Terrible Towels waving. I was looking forward to that.

“I am just excited to have the opportunity to play this year after missing last year. You can’t look past one game, one play. I want to give everything I have this year and just enjoy it because I didn’t get to last year.”

This particular camp blog’s link is broken, but you can catch up on all the news at Steelers.com.