“Steelers gave us a wonderful ride”

Home/News/“Steelers gave us a wonderful ride”
Previous Next

“Steelers gave us a wonderful ride” 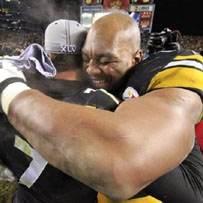 As the NFL season progressed and big offensive tackle Flozell Adams continued to show up for the Steelers despite a new and different part of his 35-year-old body aching every week, his teammates made it their goal to win Super Bowl XLV for him and get him the championship that had eluded him for 12 long years as a pro.

When they came up a little short in the 31-25 loss to the Green Bay Packers Sunday night, the devastation in their locker room was evident in every corner.

But it was Adams who found the strength to set aside the pain from a loss that cost these Steelers a chance to take on dynastic proportions with a third Super Bowl title in six years, not to mention a bum right shoulder that was badly damaged early in the game. He put things in just the right perspective.

“Even though we lost, it was still a great season.”

I hope you can see that through your tears…