From Will Graves, Associated Press: 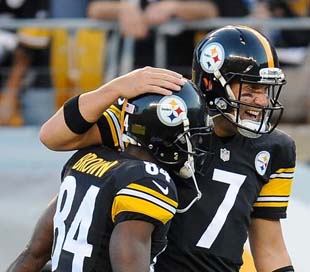 Ben Roethlisberger needed all of two series to reach the end zone twice on Saturday night.

At the rate EJ Manuel and the Buffalo Bills are going it might take a month to reach that total.

The latest rebuilding process remains a work in progress in Buffalo. The Pittsburgh Steelers offered a glimpse that theirs might already be done.

Roethlisberger hit Antonio Brown for a 76-yard score on Pittsburgh’s second play from scrimmage and found Markus Wheaton for a 16-yard score as the Steelers edged the Bills 19-16 for their first preseason win in nearly two years.

“I think we came out and started fast,” Brown said. “We got some things going in a positive direction.”

“The communication was what I wanted to work on and we didn’t have any mental errors of what I saw so far,” Roethlisberger said.

Roethlisberger, working with an offense he insists can be one of the more potent in the league, hit Brown in stride on Pittsburgh’s second play from scrimmage and the Pro Bowl receiver ran away from a pair of defenders on his way to the end zone.

“It was a great read by Ben,” Brown said. “The defensive back got caught up with another guy. Ben hit me in the spot and I was able to get up to speed and turn the corner.”

The Steelers got the ball back moments later when Shazier — who missed the preseason opener with a right knee injury coach Mike Tomlin called a “boo boo” — showcased why Pittsburgh took him with the 15th pick in the first round.

Shazier stepped in front of Manuel’s pass intended for Scott Chandler and returned it 27 yards to the Buffalo 37.

The play highlighted a frantic half of play for Shazier, who finished with 11 total tackles in addition to his pick.


You can read more from from Mr. Graves here.

You can see a few more photos here.

Just in case you missed the game…

NFL Network will air the replay at 12 noon ET today!