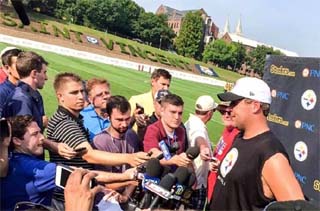 Is quarterback more fun to play than when you started?


Is the ceiling for this group of offensive players as high as any you’ve been around?


You guys talked about the red zone issues early in the season that seemed to get better as the year went on. How would you like to see this offense evolve?

We just want to keep getting better in every phase of the game. Name a category, and we’ll say we want to get better at it. Whether it’s individually or collectively, as a group we need to get better and score more points, get better on third-down, red zone, first-down, second-down, everything.


Why is 30 points per game a realistic goal for this team?

It’s what our offensive coordinator set as a goal for us, so that’s what we’re going to try and do.


How important will Martavis Bryant’s development be?

It will be big. He’s put the work in. He looks good. He’s picking everything up. Last year we just kind of put him in there and gave him a couple of things to do, which he did really well at. Now we’re asking him to do more. We’re asking him to move around a little bit, front side, back side, and to know things better. I’m going to count on him in the no-huddle. Last year he’d ask everyone what to do. Now we feel more comfortable with him knowing what to do. Hopefully he’ll be able to translate that into playing faster.


13 days from your first game, what do you try to accomplish in these early practices?

Stay cool and really just staying healthy. We’ve got everyone back on offense, so that helps. It’s not really breaking in new guys. Obviously De’Angelo Williams is new, but really just trying to keep it going and piggyback off of last year. We don’t want to take any steps back.


What has Coach Tomlin meant to you during your career? How has he changed as a coach?


What did Jerome Bettis mean to you early in your career? How would you describe the relationship that you guys have?

Like a big brother. And we still do. A [much] older big brother. It’s just great. He was such an awesome leader and person. I still to this day, whenever there’s a situation dealing with a player, I think ‘How would Jerome handle this? What would he do?’ That’s how much I look up to him, because he meant that much to me and to everybody. He was such a good teammate and leader. I’m so happy for him going in [to the Hall of Fame]. It’s about time.


You can read his full interview and watch the video here.