From Matthew Fairburn at the Syracuse Post-Standard: 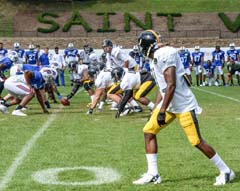 The Buffalo Bills have a vision for what they want to be.

They want to be a tough, physical football team that depends on their defense and running game to win. They want to give their young quarterback — who has a big arm, can move his feet and is a handful to bring down — a chance to succeed by surrounding him with talent. Most of all, they want to get back to the playoffs and snap a 14-year drought.

In other words, they want to replicate what the Pittsburgh Steelers did early in Ben Roethlisberger’s career.

Yes, a Super Bowl is a lofty target for the Bills, who have gone 6-10 in each of the last three seasons, but general manager Doug Whaley spent time in the Steelers organization and wants a few things to rub off on his current team.

“Their toughness and their idea that nothing less is expected than a championship,” Whaley said. “That’s what we’re trying to get to.”

Whaley has a particular vision for his second-year quarterback, EJ Manuel. He thinks he can be the Bills’ version of Roethlisberger — a big, strong-armed quarterback with some mobility. So Manuel was paying extra attention to the Steelers’ quarterback on Wednesday to see how he prepares and how he handles himself.

“It’s huge,” Manuel said of practicing with Roethlisberger. “I’ve always been a huge fan of Big Ben. Growing up in Virginia, it’s not too far from Pittsburgh, and obviously early in his career he took those guys to a Super Bowl, so like I said earlier, to get an opportunity to come out and practice with him is awesome.”


You can read more from Mr. Fairburn here. 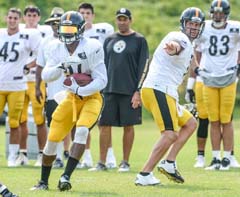 That doesn’t mean that Roethlisberger will stop going over painstaking details with his wide receivers or surrender his duties as a de facto coach when the Steelers start practicing at team headquarters next week.

“It’s been fun it’s something that I need to do and want to do.” Roethlisberger said Thursday after the first of two joint practices with the Buffalo Bills. “The coach can tell them what they’re supposed to do but if I tell them what I want them to do it’s a big difference. It’s been a good [camp] in that sense.”

Roethlisberger said he’s never coached the wide receivers as much as he has this camp, and it makes sense that he has assumed even more of a leadership role. Roethlisberger is entering his 11th season and has never had more ownership of the Steelers’ offense. He is also working with a wide receivers unit that is generally young.

Just as Roethlisberger has high hopes for that group, he is also pleased with how the offensive line has come together in camp.

“They have just such a cohesiveness as a unit,” Roethlisberger said, “and it’s something special.”


You can see more photos from training camp here.

And check out the photos from the Steelers Home Run Derby here!