“It feels good. We’ll enjoy this for about 12 hours and get ready to get back to work.” — Ben, on the Steelers winning the AFC North title.

From Will Graves at the AP this morning: 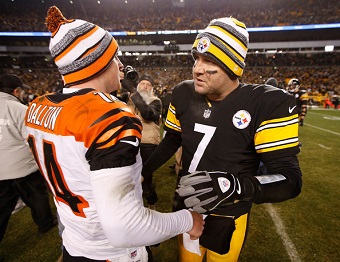 Ben Roethlisberger spoke quietly while teammates raucously pulled on AFC North champion T-shirts around him. The Pittsburgh quarterback has been here before.

“Hopefully, the journey is not over,” Roethlisberger said. “I’m not going to talk about journeys and where we are. We’re still going.”

The Steelers reclaimed a spot the NFL franchise has considered practically a birthright this millennium with a 27-17 victory over the Cincinnati Bengals on Sunday night. They turned away a late charge on Antwon Blake’s timely strip of Bengals wide receiver AJ Green and Antonio Brown’s ensuing 63-yard catch and run for the clinching score.

Pittsburgh (11-5) earned their first division title since 2010 and sixth since 2000 by sweeping the season series from the Bengals (10-5-1). The Steelers are the No 3 seed in the AFC and will host Baltimore in the wild-card round Saturday night. Pittsburgh split two games with the Ravens this season, each team winning at home.


“He played his butt off. My hat’s off to that guy, man. He didn’t bat an eye. He wasn’t perfect — but neither was any of us, also. Tough dude. I told him after his first touchdown I appreciated him because a lot of guys would have tapped out in that situation.” — Ramon Foster on Ben.

And from Chris Adamski at the Pittsburgh Tribune-Review: 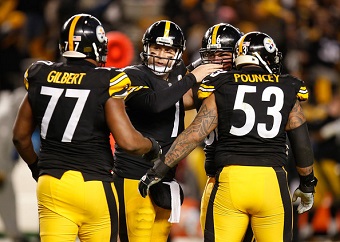 Ben Roethlisberger missed pregame warm-ups Sunday because of what the Steelers called “a minor stomach virus.”

By the time the virtual AFC North championship game ended, it was the Bengals who were left feeling sick.

Roethlisberger, though visibly weakened and speaking softly, felt much better after the game than he did before it.

“We won,” he said after a 27-17 against Cincinnati that clinched the AFC North division title, “so I feel pretty good.”

Sunday’s performance — 24 for 38, 317 yards, two touchdowns, one interception and one lost fumble — wasn’t Roethlisberger’s finest this season. But it did cap the finest statistical season for a passer in Steelers history.

Roethlisberger finished tied for the NFL passing yardage title with Drew Brees (4,952 yards), joining Jim Finks in 1955 as the only Steelers player to win or tie for that distinction.

Roethlisberger was noticeably off target on a handful of throws, particularly in the first half. But as coach Mike Tomlin is wont to say, it was a winning performance, the fourth in a row for the Steelers (11-5) and their franchise quarterback.

“I knew he was sick when he didn’t come out for warm-ups,” left tackle Kelvin Beachum said. “But he sucked it up and found a way to pull through for us.

“And what better way to have our leader, sick as he is, going through what he’s going through, coming out and playing a game like he did tonight.”

You can also check out a few photos here.