From Alan Robinson, at the Pittsburgh Tribune-Review: 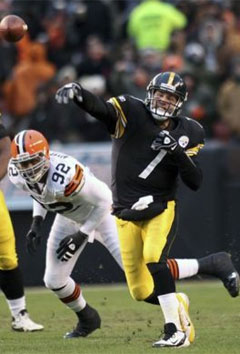 The offseason officially arrived only hours before, yet Ben Roethlisberger already was eager to talk about the 2014 season with offensive coordinator Todd Haley.

The topic: the no-huddle offense.

The idea: to begin next season with the no-huddle as the Steelers’ base offense.

“We got to the point (of the season) where it was like, ‘OK, this is where we’re at our best,’ ” Roethlisberger said.

Looking at the numbers, he’s right.

The Steelers began using the no-huddle far more frequently beginning with the Bills’ game Nov. 10, which coincidentally began the second half of the season.

The idea was to take elite pass rusher Mario Williams out of the game, and it worked; he didn’t have a sack or even get close to Roethlisberger.

It probably worked even better than Roethlisberger, Haley and quarterbacks coach Randy Fichtner figured it would.

Those 223 points were sixth in the NFL.

Roethlisberger didn’t throw for as many yards in the second half (1,872) as he did in the first (2,145), but that’s a byproduct of having the lead more often and not needing to throw as much, plus an upgraded running game.

The biggest statistical turnaround: Roethlisberger was sacked only 11 times after the no-huddle became the offense of choice, compared to a whopping 32 times in the first half. He also threw only five interceptions in the second half of the season, compared to nine in Games 1-8.

“(The) production has gone up, and I think that the mistakes have really come down,” said Roethlisberger, who calls the plays in the no-huddle. “I think the guys really enjoy (running the no-huddle). I’m sure if you ask the receivers, they like it. Le’Veon (Bell) likes it, mixing in the run and the pass so it’s not so pass-heavy.”

You can read more from Mr. Robinson’s column here.