We received this email from a Browns fan, after he saw the photo of his son receiving the game ball from Ben on the website’s Facebook page –

Ben, first off I would just like to say that was a class act you giving the game ball to a fan.

I am a Cleveland fan and I took my kids to the game yesterday. They are both big Steelers fans!

You made my son, Caden, the happiest fan ever by giving him the game ball! That is something he will never forget.

After we left the game, he said, “Dad, I didn’t tell him ‘thank you’ for the ball!”. I told him I would try to contact you to let you know he loves it and to say thanks.

Also if you could thank Antonio Brown – he signed a jersey for my other son, Chace, before the game yesterday. It was a great day for both of my boys and it was real class for both of them to do that.

I can’t say ‘thank you’ enough to both of them, and to the Steelers organization — and that is coming from a life-long Browns fan.

Once again that was real class, and I appreciate it and I will have to cheer for you guys a little bit now. — Good luck in the playoffs, Jared Clonch. 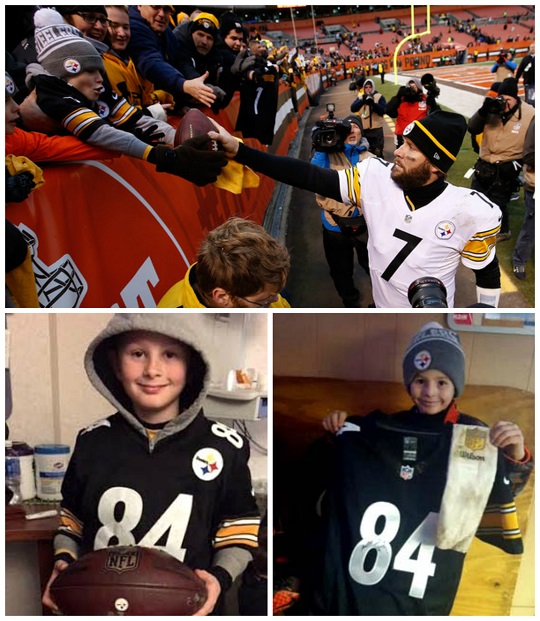 That’s Caden receiving the game ball from Ben above & showing off his prized possession below left. Chace is on the right showing off his autographed Antonio Brown jersey!

Jared, thank YOU for sharing the photos and allowing us to post your email! Very classy move by you!

UPDATE on January 6th: Jared asked that we add this to the post –

“I didn’t realize when I wrote the email that it was going to turn into something this big. We would like to thank Steeler Nation for all of the great comments (on Facebook) in which we have read all of them and will continue to read as they post! Very classy fans as well! Good luck Ben! Hope you throw for 500 yards against Cincy and a couple touchdowns to A.B.!” — Jared with Caden & Chace.