Home/News/“Thank you Ben Roethlisberger”
Previous Next 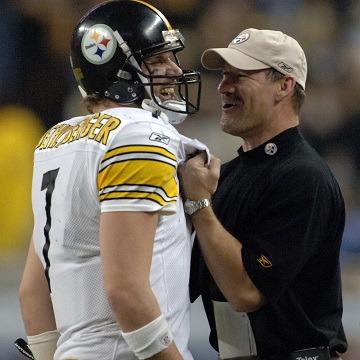 It is up in the air whether this will be the last season of Ben Roethlisberger‘s career as not only a Pittsburgh Steeler, but a player in the National Football League. Many speculate that this will be his last season regardless. It is certain that others outside of Pittsburgh have strong, negative opinions about Roethlisberger, but the members of Steeler Nation have plenty of respect and admiration for him.

He has produced 156 regular season wins (5th all time) to go along with 13 postseason wins (4th all time) and two Super Bowl victories. He is the greatest Steeler quarterback ever and deserves to be seen as so. If this is the last year that we get to see Roethlisberger put on the black and gold, I think I can speak for the majority of the fan base and say thank you.

It has been a long road from April 24, 2004 when he was drafted until now. Media scrutiny, off the field questions and a plethora of injuries have all been part of the rollercoaster for Roethlisberger. Pittsburgh has seen him grow into a mature leader who understands what it means to be a Pittsburgh Steeler.

He has joined the field with multiple Hall of Famers (with whom he will join in Canton one day) and is one of only two players drafted in the first round of the 2004 NFL Draft still playing (Larry Fitzgerald). We have seen ups and downs throughout his career, but every time he suits up as QB1, Steelers fans across the world believe a victory is possible regardless of the circumstances. That is rare to find and we “aght” to be appreciative of having that for so many years.

A 13-win first season, his shoestring tackle in the 2006 AFC Divisional Game, game-winning drive in Super Bowl XLIII, combined division record of 67-22-1 (including playoffs) and so much more have given Steeler fans memories for generations down the line. Roethlisberger only has a losing record against five out of the 31 NFL teams he has played.

It is rare in today’s sports world to have someone play for the same city and fan base for as long as Roethlisberger has. Albeit, it is not like the Steelers were ever planning on letting him go, but he has never once expressed displeasure with the organization nor wanted a fresh start.

As he has enjoyed on the field success, Pittsburgh will also forever be grateful for his contributions to the community, which I would assume won’t stop with retirement. His foundation assists police and fire departments specifically in the K9 departments and he has actively been involved with the Make a Wish Foundation. Roethlisberger has volunteered several times throughout his career for those who need assistance.

Early on in the COVID-19 pandemic, Roethlisberger spent over $10,000 buying gift cards to support local businesses who were struggling during the time.

It is hard to encapsulate almost two decades of memories, wins and much more in a short article, but the bottom line is that Steeler Nation will always be thankful to Roethlisberger for his contributions on and off the field.

Numerous game-winning drives, thrilling touchdown passes, “Houdini” escapes in the pocket, helping the local community and simply being a reliable, loyal quarterback for 18+ years will always be remembered in Pittsburgh. We do not get to experience greatness often and when we do, we do not soak it in and enjoy it while it lasts. If this is indeed the last we will see of Roethlisberger, let’s soak it all in. Thank you Big Ben for your years of commitment to the Steel City.


You can read more from SteelerNation.com here.