“That was a good team victory”

Home/News/“That was a good team victory”
Previous Next

“That was a good team victory”


“Offense, defense, we were up, we were down, there was no quit in anybody. I thought we prepared well, and I’ll do everything I can, we’ll do it to enjoy this tonight and next week try and get to 1 and 0 again – just prepare the best we can.”

And from Ed Bouchette, Pittsburgh Post-Gazette: 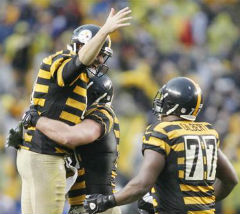 Their 37-27 come-from-ahead, come-from-behind victory at Heinz Field raised the Steelers record to 4-6 with two straight wins to start the second half of the season.

Stafford was brilliant for one quarter, the second, when the Lions (6-4) stunned the Steelers defense for 27 points, and Johnson went wild on Ike Taylor.

Roethlisberger was magnificent throughout, opening the game in the no-huddle offense and playing that scheme much of the way. He completed 29 of 45 for 367, four touchdowns and no interceptions. He was sacked once.

He did it with little help from his ground game, which managed just 40 yards on 27 carries.

Roethlisberger’s fourth touchdown pass was a 20-yarder to Jerricho Cotchery, who caught it in the end zone on a fake screen play that ended all the drama with 2:29 left.

“I came here to play with him. He doesn’t get a lot of attention, but with the amount of touchdowns and yards in a cold-weather city, it speaks volumes about him. He has a lot of respect from around the league.” — Jerricho Cotchery on his quarterback.

Twice in the second quarter while Detroit was inundating them with touchdowns, the Steelers responded with field goals after cracking the red zone. Suisham kicked a 25-yarder and then a 34-yarder.

But then they got some defensive help late on Detroit’s next drive and some aid from the Lions themselves. Stafford moved his offense to second-and-4 at the Steelers’ 9, looking to respond to another field goal with another touchdown. But Ziggy Hood rose up to tackle Reggie Bush for a 1-yard loss, Ryan Clark tipped away a pass headed for Johnson in the end zone and the Lions lined up for a field goal.

Instead of kicking the 27-yarder, holder/punter Sam Martin took the snap and tried to run with it. He fumbled while being tackled short of the first down and the Steelers took over at their 3.

THAT looked problematic when it was third-and-9 at the 4. But Brown caught another pass from Roethlisberger, this for 20 yards over the middle, and a 97-yard, winning drive got its fuel.

It ended when fullback Will Johnson caught a 1-yard touchdown pass from Roethlisberger to put the Steelers in front 30-27.

“It was a situation that I told the guys, first and foremost, let’s get a first down,’’ Roethlisberger said of that 16-play, eight-minute drive. “If you get a first down, then you see where you go.”

That is how they now look at their season that started 0-4. Win a game, see where it goes.

“We said coming in that we wanted to be 1-0 after this week, and that is what we are,’’ Roethlisberger said. “Starting Monday, we are back to square one.”

You can also check out a few photos of #7 in action during the game here.