On October 22nd 2015, Ben announced a grant to the Shawnee Police Department in Kansas.

“I’m proud to call the City of Shawnee my home, and wake up every day with pride that I get to serve the citizens of the greater Kansas City area. I’ve been a K-9 handler for five years. It’s a position that I have always wanted to hold, dating back to the days I served in the United States Army. I’ve seen our unit grow from one to two K-9 teams within the last seven years. We knew we could serve the area better with a third K-9 team, however it is a difficult item to pass with the budget constraints every municipality faces. Words cannot express how thankful we are for the Ben Roethlisberger Foundation.” — Shawnee K-9 Officer Shaun Arnold (in photo bottom right).


Today, we have photos of Shawnee Officer Ryan Skinner and his rookie K9 partner, Obelix, which is Greek for “Pillar of Strength”: 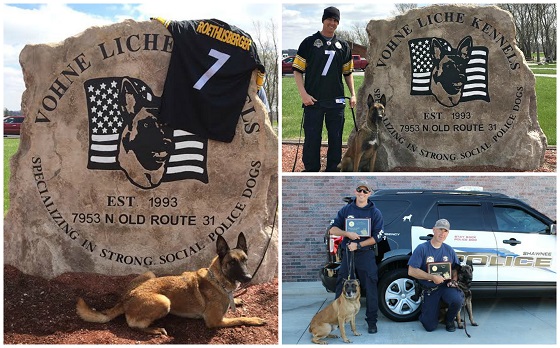 With this grant, the Shawnee Police Department was able to expand their unit from two to three K-9s which now gives them a dual purpose explosive team.


“The addition of a new canine to our unit will greatly expand the capabilities of these officers and the services they provide our citizens. We sincerely appreciate the generosity of the Ben Roethlisberger Foundation in helping keep Shawnee a safe community. Being a native of Pittsburgh and a huge Steelers fan to this day, makes this grant award that much sweeter. The Shawnee Police Department continues to be grateful for the generosity of Big Ben!!” — Shawnee Chief of Police Rob Moser.

Thank you so much to Chief Moser for sharing these great photos with us!