“We greatly appreciate the grants Mr. Roethlisberger has provided to us. They benefit not only our K9’s and their partners, but they also benefit our communities because the dogs are more readily available to help with calls for service,” — Sheriff Berry.

Meet Opie, a handsome and curious German shepherd from the Czech Republic, who will soon become one of the newest patrol and drug detection K9 members of the Charles County Sheriff’s Office. Opie was acquired earlier this year after Ben and his foundation tossed a grant to the CCSO worth $8,000, as part of his longtime commitment to enhancing K9 units for police and fire departments throughout the country.

Opie joined the CCSO when he was 16-months old and has been with his human partner, PFC Steven Davis – a 12-year-veteran – ever since. They are currently in K9 patrol training for 16 weeks and will continue with narcotics detection school for another 10 weeks. Upon graduation, they will become a vital part of patrol operations. “Opie will be able to help officers track missing or wanted persons, search for evidence, and conduct other essential patrol duties,” said Sheriff Troy D. Berry.

As far as Opie’s personality, his handler says Opie is focused while training, loves rewards for doing a good job, and is completely lovable when he’s not working. “Opie is really good at obedience, mostly because he loves to play fetch after we’re done training. 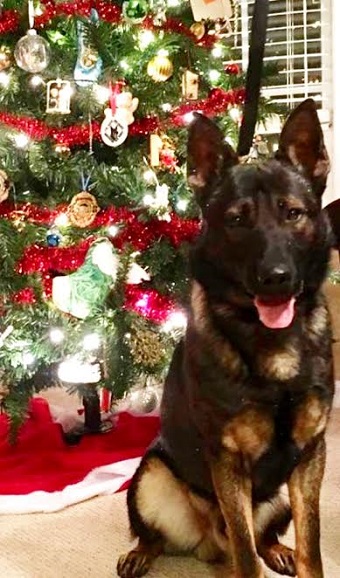 When I bring him home after work, he loves to play with my children and our other dogs,” said PFC Davis. “In fact, Opie and my daughter have a special bond she formed on her own. She likes to greet Opie with a very high-pitched, sweet voice whenever she says hello to him, and Opie tilts his head whenever he hears her voice as if he’s paying full attention. She doesn’t use that voice with our other dogs.”

With the grant, the agency was also able to purchase other necessities for all of the K9’s to include heated water buckets; large, durable Kong toys used as rewards for the K9’s; and two transport kennels.

Mr. William Cotton, Lead K9 Trainer for the CCSO, said the K9 Unit currently has 11 canines that work with patrol officers during each shift, every day of the week. All K9’s are crossed trained in drug detection and patrol, and two of the eleven dogs are skilled in explosive odor detection.


“I’m proud of everyone who worked on this grant. It was a collaborative effort between the CCSO and the Department of Emergency Services. They worked hard to prepare the grant application and their efforts paid off. We are so grateful to the The Ben Roethlisberger Foundation for selecting us. This is the second grant the CCSO has been awarded from The Ben Roethlisberger Foundation – the first was in 2014 in which the agency purchased Cooper, a Belgian Malinois, who went on to become a bronze medal winner in the 2015 World Police & Fire Games. — Sheriff Berry.

You can support future K-9 grants by joining Ben’s crowdfunding campaign on https://pledgeit.org/big-ben. Big Ben is pledging $1,000 per touchdown this season to his foundation. Supporters can increase the impact by pledging to donate any amount per touchdown.