A special grant was given to the Wheeling, WV Police Department this month! 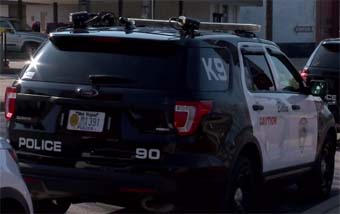 The department received a $10,000 check from The Ben Roethlisberger Foundation to help their K-9 program.

“The Ben Roethlisberger Foundation does a lot of good things in the community, and we’re happy to be a part of that, and (we’re) certainly very thankful that they recognized the Wheeling Police Department to make a contribution to our K-9 unit,” Wheeling Police Chief Shawn Schwertfeger said.

The Community Impact Coalition worked with Ben’s foundation to obtain the grant.

“It feels great to help them out” said Lori Garett-Bumba from the Communication Impact Coalition. “They have helped us out so much over the past few years. Since 2005, they partnered with us for Project Sticker Shock and prescription drug takebacks and the very first med return box here in the state of West Virginia.”

“We outfitted one of our brand new cruisers that you see over here with that money and there’s a lot involved with a K-9 specific vehicle,” Schwertfeger said.

Schwertfeger says they already have five K-9s, who are such a valuable asset to the officers.

“We have four narcotics dogs and a bomb dog,” Schwertfeger said. “We’re one of the few departments in the area that has an explosives detection dog.

“It’s a great community policing initiative, or tool, and these handlers are awesome. They’re really good working with children, members of the community and they are always there for me.”