The Ben Roethlisberger Foundation: Grant to the Euclid Police Department

The Ben Roethlisberger Foundation: Grant to the Euclid Police Department

Today, Ben announced that his Foundation, in association with The Giving Back Fund, will be distributing a grant to the Euclid Police Department in honor of the Steelers upcoming game against the Cleveland Browns on Sunday, November 24th. 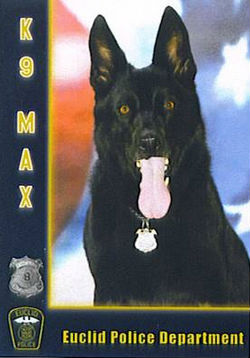 The department will apply the grant funds to the purchase and training of a new dog to replace recently retired K-9 Max (photo at left). Funds will also be used to purchase a ballistic vest for the new K-9.

Euclid Chief of Police Thomas Brickman said, “On behalf of the Euclid Police Department, we would like to extend our deepest gratitude to the Ben Roethlisberger Foundation for the K-9 Grant that has been awarded to our community. Like many other U.S. cities, the City of Euclid has its financial challenges. With the impending retirement of K-9 Max due to health reasons, we thought our only option would be to reduce our K-9 unit strength to two working dogs. With the assistance of the Foundation, we will now be able to keep three working dogs in service. ”