On behalf of The Ben Roethlisberger Foundation, I would like to personally thank all of our sponsors and participants for their generous contributions! — Ben 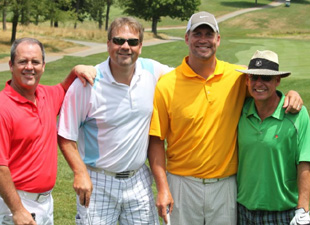 Proceeds from the Invitational benefit the Make-A-Wish Foundation and The Ben Roethlisberger Foundation.

For the past several years, Ben has devoted his time to the Make-A-Wish Foundation because of his passion to help children. One of the most memorable of these Make-A-Wish moments was when he met 14-year old Akeem Havens, who signed a contract with the Pittsburgh Steelers in May of 2008 to become one of Ben’s go-to wide receivers for the day!

A total of 112 golfers participated in the tournament with 27 companies and corporations sponsoring the event, including Apollo Jets, Patriot Homes Corporation, University of Pittsburgh Medical Center, PNC, #1 Cochran, and the Pittsburgh Steelers.

The golfers had a great time with the pre-tournament competitions, which included the Chip Shot Challenge, a Super Bowl XLIII Challenge (throwing the football through the hands of a cardboard Santonio Holmes), Shuffleboard Golf, a “Big Shot” Challenge (driving your way through the AFC North), a $5,000 Putt Challenge, and a $1 million dollar Shootout (165 yard shot). During the tournament, golfers had the opportunity to try their hand at other competitions along the course, including Poker & Roulette Golf, a Men’s and Women’s Long Drive, the Straight Drive, a “Coffin Corner” on the 9th hole, and a TPC Sawgrass “Island Green” hole on the 17th.

The weather was perfect for a patio lunch buffet provided by the Sewickley Golf Club – sunny and 85 degrees with a slight breeze. Late in the afternoon, after 18 holes of golf, there was a delicious dinner provided inside the Club, where prizes were given for the day’s big winners.


You can see photos from the Invitational here!