Still working on rehabbing his injured left knee, Steelers Quarterback Ben Roethlisberger joined The Cook and Poni Show for the weekly #1 Cochran Ben Roethlisberger Show and sounded optimistic about when he can get back on the field. 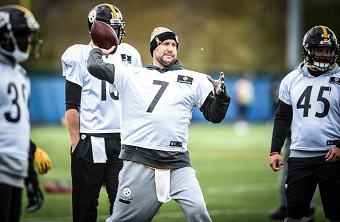 “I went out today…and I went through some individual work,” Ben told us.

When asked about the chances of him playing next week against the Baltimore Ravens and if he’s hopeful, Ben left the door open that he could play.

Ben said it is “his hope” to practice next week and was asked if he would require some practice reps before he felt comfortable getting back into game action.

“Typically I would say no, but it would be nice because I need to know what I can and can’t do. Mentally, no, I don’t need it. But physically, just to know what I’m capable of doing…I think in this situation it would smart to get a good, full practice in.”

Ben also shared that if the game against the Patriots was a playoff game, he “would have done everything he could” to play.

All of the talk has been about Ben’s injured left knee, but what gets overlooked is in the injury he’s dealing with in his right knee as well after Dolphins defensive lineman Ndamukong Suh kicked him in it.

“When it happened, I knew it was something funny happened. It just didn’t feel like a natural thing. When I stepped up in the pocket, I felt something hit my knee harder than something has ever hit my knee before…It felt so weird to me that I was like, ‘Someone just tried to trip me I think,’ but obviously only he knows that and obviously the league didn’t think he did.

This is the first time Ben has been on his show since the loss to the Dolphins and was asked about the teams sub-.500 record against teams with a losing record under Mike Tomlin and the criticism that they play down to their opponents.

“I think maybe people play up to us,” Ben said laughing. “I don’t know. I know that there is a bad record there. I can’t say it’s his [Mike Tomlin’s] record, because I’ve probably played in a lot of those games. Our record is not good and it’s frustrating. I don’t know if there is any particular reason, if there was, I think we would get it fixed. We need to play as well as we can no matter who we’re playing.


You can listen to excerpts or the entire show (last link) here.