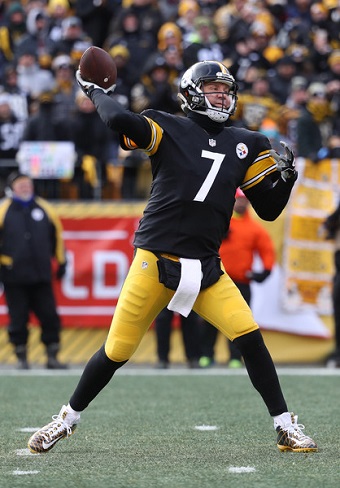 It was a huge victory on the field last week for the Steelers as they won their wild card round matchup with the Miami Dolphins, but an injury to Ben Roethlisberger still hangs over the team as he left the stadium in a walking boot that day.

“I’m doing well,” Ben said. But he went on to say that the foot isn’t 100%. “I feel it obviously today, but like I said, I’m walking around without a boot and I’ll be ready to go.”

There was plenty of controversy over Ben’s injury as many fans and analysts wondered why he was still in the game with the team up 18 and Mike Tomlin electing to protect another player as he pulled Le’Veon Bell.

Ben was asked about why he was still in the game at that point and whose call that is.

“That’s not my call, I’ll never go to coach and say ‘Hey, take me out.’ I stay in the game and fight with my guys. He’s the boss, he tells me to come out and sometimes I may fight him on it and say I want to stay in the game, but sometimes I’ll just listen to him and come on out of the game. So really, it’s his call, not much I can do about that.”

Ben also talked about the play call that came in for him to be throwing late in the game with the verdict all but solidified.

“Coach Haley called a pass play, we had a pretty good play called. Hindsight always is what it is, should we have ran it, could we have done this, could we have done that? Potentially, yes. We also had a receiver, a young receiver, not run the proper route, and if he would have ran the proper route, the ball probably could have come out of my hand quicker because he would have been open, and it wouldn’t have happened. That being said, I’m not injured, I’m fine, I’ll be ready to go, and we move on.”

Looking at how the rest of the team performed on the field, Ben told us about what it’s like getting to turn around and hand the ball off to Le’Veon Bell and watching him do his work as he carried the ball 29 times for 167 yards and two touchdowns.

“You turn around and you hand it off and you never know what’s going to happen. Sometimes he’s out of there like a flash, he hits the hole and he’s gone. Sometimes it looks like he’s literally standing still and I’m like, ‘Oh my goodness, do something so you don’t get hit,’ but he knows what he’s doing, he’s unbelievable.”

Ben was asked about was the Sports Illustrated cover story written about him last week which called him the most polarizing athlete in sports which also brought his past. Ben was asked for his reaction to the story and if he read it.

“The witch hunt that was written? I think he calls me polarizing and I guess if going home and changing diapers, playing Play-Doh, playing dolls and playing catch is polarizing, guilty.”

Ben went on to say that from everything he’s heard, “it’s just not worth it to even read the story”.


You can read the full recap & listen to the audio here.