Just in case you missed his show this morning on 93.7 The Fan:

Lil’ Ben is a BIG fan of James Conner – 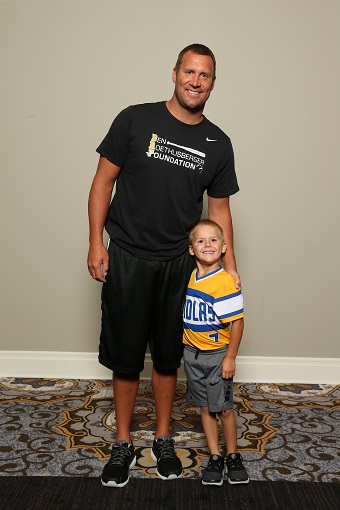 After Ben returned home on Sunday evening, Benjamin Jr. wanted to play football in the living room…And who did he want to be?

“I texted (Conner) and I told him, ‘James, it must have been pretty cool to have (Heinz Field) chanting “Conner”, but you want to know something that’s even cooler? When I come home and play catch with my son and every time he catches it he’s you!’

I said thanks for being a good role model and please don’t ever stop understanding that everything you do you have a chance to be an amazing role model.”

“I’ll be honest, you know we get asked every week, not just on this show, but every week in the locker room and I think I said it after this last game. I don’t want to talk about it because he’s not here. When he gets here, we’ll talk about it. Until he’s here, I’d rather talk about James [Conner] and the guys that are here that are helping us win now.” ​

When asked about the move by the Browns, and on Todd Haley in particular –

“You know, it’s hard, I was kind of surprised. I don’t think you typically [fire] both a head coach and a coordinator. You wouldn’t think that, at least. I thought that maybe Todd would have gotten the job, but obviously they felt like they wanted to go with the defensive coordinator instead, with Gregg [Williams].” ​

“[Haley] a very passionate coach. He wants to win; he wants to get the best out of his players. I think there’s nothing wrong with that. I think that’s what you need, you want to have passion from a player, you want to have passion from a coach. Whether it’s from a player or a coach, sometimes it can come across as…and we talk about it with AB sometimes or with other players…sometimes it can come across in a negative way. But, when you’re passionate about wanting to win, that’s not always a bad thing in a coach.”​

“I hate to admit this but I have to be honest, I received a text from Brett Keisel. Coach Tomlin’s meeting starts at 9. The only reason I knew it, I had my Apple watch on and it vibrated and I looked at it and Keisel texted me about Michelle’s brothers and that’s when the word came through. I’ll be brutally honest, I kind of broke down right there and I don’t really remember what Coach Tomlin said. I was so overwhelmed with emotion and caught up because Michelle is such a dear friend. Honestly, I don’t even remember what he said because I was just in prayer and in thought and [had] a heavy heart for Michelle.”

“It has been a tough morning, a lot of people there, a lot of people coming up to show their support not just for her but for this community and it’s just nice to see but it’s still tough. You never think it’s going to happen in your city and then you get word that you know somebody who potentially had family there and then there’s still a lot of questions because there were no real answers coming to us.”


You can read the rest and listen to Ben’s full show here.