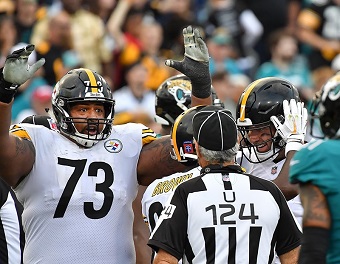 Ben Roethlisberger says his run into the end zone to clinch the game for the Steelers against Jacksonville on Sunday was the third option.

The Steelers QB says that Antonio Brown was the primary target.


“The play was designed first and foremost for AB in the flat, so it’s kind of a little roll out and he was covered and the second option is Vance (McDonald) on a little shovel. The (tight) end really kind of let me go and looked up the shovel, almost like they knew it was coming . . . so from there you don’t really have any other options except run it and there was kind of a little bit of a crease and I saw the end zone . . . so I said I’m just going to try and get there.”

Roethlisberger says he knew the football crossed the goal line but wasn’t sure about the rest of him.


“You’re never really sure about the back half of your body so I knew the ball was in, it was just a matter of everything else.”

While he isn’t sure of the stats, Roethlisberger believes he is running more than he has in previous seasons but the final run “was just heart and desire, wanting to get in.”

The Steelers offense started extremely slowly not being able to make much happen in the first half, not getting their first, first down until about the last 3 minutes of the half.

Roethlisberger says he doesn’t really have an answer for the slow start except that Jacksonville outplayed them early on.


“It’s hard when you don’t get into a rhythm, when you’re not getting first downs, when you’re not staying on the field. For one you put your defense in a tough situation because they’re getting tired and two you’re not able to get anything going and we just couldn’t get it going. Not really sure why, it was just one of those days they had our number early.”

Starting fast is something Roethlisberger says the Steelers want to do every game but more important than a fast start is a strong finish.

‘Bend but don’t break’ was the story of the Steelers defense on Sunday only allowing three field goals in the first half and Roethlisberger says he was impressed by their play.

“They fought their butts off and I told them at half time I kind of got down on our offense and praised our defense . . . in only giving up 3 points instead of 7 every time (Jacksonville) got down there. They gave us a chance to win that game so my hat goes off to our defense and the way they won that game for us.”

You can listen to this part of his show here. 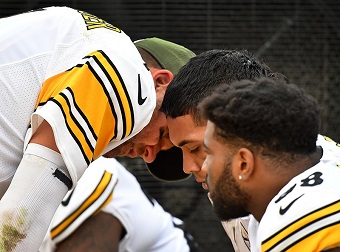 Conner ran for only 25 yards, dropped a pass on fourth down that would’ve resulted in a first down, and dropped a touchdown pass that would’ve put the Steelers ahead late in the fourth.

Roethlisberger says what he wants to see from Conner now is how he bounces back Sunday in Denver.

“I don’t want him to lose confidence in his hands because I’m not losing confidence in him and he’s been great as a receiver for us. You know what, sometimes those things happen, the best in the world drop balls.

Even though Conner struggled, Roethlisberger says he texted him last night to tell him he knows of one fan that still believes in him.


“Even when you drop balls I’ve got something to tell you…I said, ‘Last night, my son said for Christmas he wants a Steelers helmet, gloves and a James Conner jersey’, and I said, ‘Obviously my son doesn’t have any hard feelings toward you, so you shouldn’t have them toward yourself!’ He had a good chuckle out of that.”

Roethlisberger adds he knows Conner will put the game behind him and that the Steelers “need him” the rest of the way.


“That’s part of being a professional football player, putting things behind you both good and bad.”

You can listen to this part of his show here.


And a BIG THANK YOU from the Chief last night! 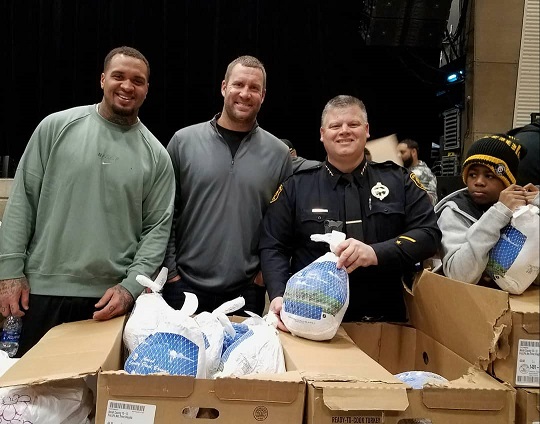 Scott Schubert @PghPoliceChief
Thank you to the @steelers & @pghfoodbank for inviting @PghPolice to participate in their annual Thanksgiving Turkey Giveaway. It was truly an awesome experience & the never ending smiles was infectious. Proud of @maurkicepouncey, @_BigBen7 & their teammates for giving back!


Wishing all of you a warm, safe and wonderful Thanksgiving Holiday Weekend!