The movie, filmed in Pittsburgh (one of four cities used as a backdrop) and directed by Christopher Nolan, opens nationally on July 20th and stars Christian Bale, Michael Caine, and Anne Hathaway.

*Just click on each player’s name to check out their “actor page” on IMDB (International Movie Data Base).


Below is a photo from the Steelers locker room last summer as Ben, Heath Miller and Brett Keisel prepare to suit up for their roles as the Gotham Rogues: 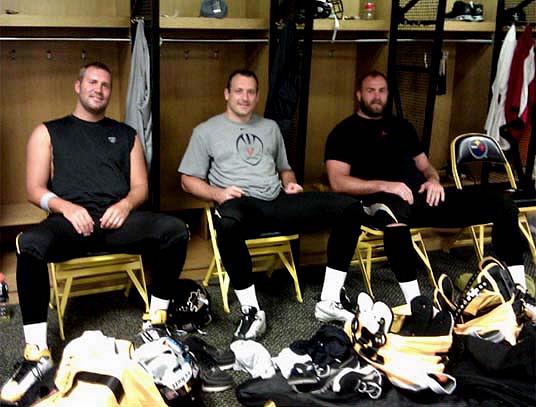 The home team Rogues, coached by Bill Cowher, take on the Rapid City Monuments at Heinz Field, which was also transformed for it’s role in the movie!

More from the filming last summer….

Roethlisberger and about a dozen of his veteran teammates will take part in the filming of Dark Knight Rises playing — what else? — football players at a familiar venue for them, Heinz Field. The production, which has been filming in Pittsburgh, moves Saturday morning to the Steelers home, where thousands of extras playing fans have been recruited.

The Steelers quarterback has become close with Thomas Tull, the film’s executive producer who joined the Steelers ownership group two years ago.

“I’m kind of getting everybody together,” Roethlisberger told the Post-Gazette. “I heard it’s going to be a neat thing at the stadium. I don’t think it will be a big part, it’s not like we’re chasing Batman down or anything. It’s something neat that in 10 years or 20 years we can tell our kids we were in a movie. Thomas does movies big and I’m sure it will be a big-time movie and something fun to be part of.”


You can read more from Mr. Bouchette’s article here.


You can watch the official trailer for the movie here.


You can check out more of Ben’s photos in his album here.