“The evolution of Ben Roethlisberger as a quick-strike passer”

“The evolution of Ben Roethlisberger as a quick-strike passer” 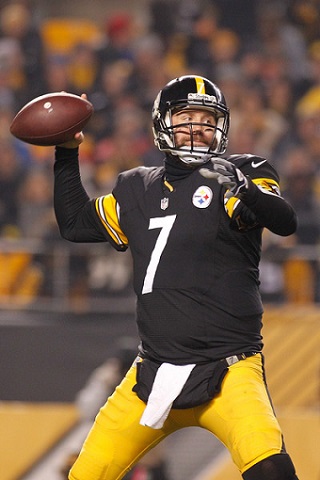 Ben Roethlisberger has the footwork of a finesse offensive tackle and the right arm power of the bear in “The Revenant.” For years, those two qualities made Roethlisberger a natural at staying in the pocket for four, five, six seconds at a time while waiting for big downfield plays to develop.

As the hits mounted, the Pittsburgh Steelers turned to offensive coordinator Todd Haley, who has Roethlisberger racking up more yards and less poundage.

But Roethlisberger now looks more like a pure, drop-back passer than at any point in his career.

An unscientific, 20-throw sampling from the Week 15 win over the Denver Broncos shows three things:

* On short routes, the ball comes out fast.

* On intermediate to longer routes, the ball comes out in rhythm.

* There are minimal “Ben being Ben” scramble plays that were once his trademark.

“You never want Big Ben to lose creative ability — that’s what makes him unique,” said ESPN Insider Matt Bowen, a former NFL safety for seven seasons. “But what’s made him better is staying through the pocket, finding the matchups he wants, and not having to put so much stress on his body.”

What stands out about Roethlisberger in 2015 was how quickly he released the ball. Of 20 throws against Denver — tracking two first-quarter drives and most of the fourth quarter — Roethlisberger released the ball in less than 2 seconds on nine of them (unofficial stop watch). Roethlisberger held the ball for longer than 3 seconds on five of those 20 attempts. Nearly everything was out of the shotgun with one true I-formation, seven-step drop in the sample of passing downs. Denver was a unique game because the Broncos stacked the box and forced Roethlisberger to throw a lot. But this game is a good example of Roethlisberger’s skill set overall.

Yes, Roethlisberger has the perfect assortment of playmaking weapons for which to spread the ball. But he’s also refined his footwork and mechanics while throwing with conviction, knowing exactly where he wants to go with the ball.

“His footwork has improved, his eyes and vision have improved, and improved quickly,” Bowen said. “It’s also a confidence level that you can’t see on tape.”


Want to see the tape for yourselves? Stop by Mr. Fowler’s blog to watch video and more on this topic.