The Steelers in London

Home/News/The Steelers in London
Previous Next

The Steelers in London

“It’s an awesome honor. I want to represent the black and gold and the NFL. I knew we had fans all over the world, but the last time I was here I got to meet them and see a bunch of them.” — Ben.

The Steelers met with the media this morning in London, just a few hours after their arrival. Some of the highlights from NFL.com: 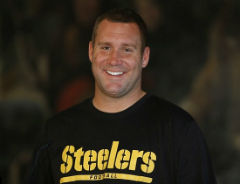 Cornerback Ike Taylor was in high spirits — or just delirious with exhaustion — as he took his first questions from the assembled media, which largely was a British contingent.

“I love your accent,” Taylor said after receiving the first question at the podium. “Say that again, please.”

The 11-year veteran had the media laughing as he said, “I would love to meet the Queen. She’s the head lady.” Taylor also appealed to the press to toss some British slang words to him so that he could fit in while in London.

Inevitably, Roethlisberger was asked about the famous London landmark with which he shares a nickname.

“People keep asking me how many times I’m going to hear that joke this week,” ‘Big Ben’ said. “I’m supposed to keep count of how many times people mention it.”

For all the fun, though, the Steelers made it clear that they aren’t in London for anything but a victory on Sunday. With an 0-4 start essentially spelling doom for an NFL team — only the 1992 Chargers have made it to the postseason after losing their first four games — the novelty of playing a game in London will be overshadowed by the urgency of needing that first win.

“For us every game is a must-win,” Roethlisberger said. “That’s the way we approach every game. The only difference this week is that we’re in a different country.”


And from the British Daily Mail: 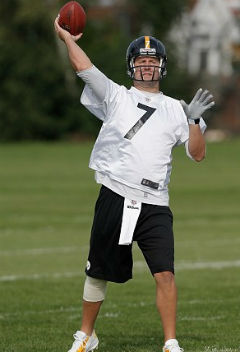 The Steelers arrived in England in the unfamiliar position of beginning the season 0-3. It is their worst start in 27 years and, should they lose to Minnesota on Sunday, Pittsburgh face the prospect of falling to 0-4 ahead of their bye week.

‘Its frustrating when you’re not winning football games because it hurts,’ Roethlisberger said: ‘As a leader and a guy who has been around a long time on this team, that’s all that really matters to me – winning and losing.’

Despite being the away team on Sunday, Pittsburgh will be well supported by their large fan base. The ‘Steeler Nation’ are not used to losing, and Roethlisberger struggled to put his finger on why they have started the season so bad.

The other teams have scored more points than us and we just haven’t got it done,’ the 31-year-old said.

He added: ‘Our expectations for ourselves are even more than any fan could have and that’s saying a lot because we know the expectations of Steelers fans. I like the work ethic I’ve seen from the guys because we are all disappointed. We want to play well for our fans and when we’re not doing that it doesn’t make us happy either.’

‘Big Ben’ is buoyed, though by the return to fitness of Heath Miller, a man he describes as the best tight end in the league.

Roethlisberger said: ‘Heath is another guy that has been on my team for a long time and for me is the best tight end in the game. He is a comfort blanket and security blanket for me in the pass game and the running game. Juts the knowledge of having him out there really makes us all feel more comfortable on offense.

‘We would like to possess the ball and we want to try and extend drives. That means converting third downs and not turning the ball over. The more we can keep one of the best running backs (Adrian Peterson) in the league off the field the better we feel we can be offensively and defensively as a team.’


You can read more here

You can watch & listen to Ben’s press conference here (video).