“This kid has a lot of upside”

Home/News/“This kid has a lot of upside”
Previous Next

“This kid has a lot of upside”

Teresa Varley, Steelers.com: Looks like Bill Cowher was spot on when talking about Ben Roethlisberger in 2004. 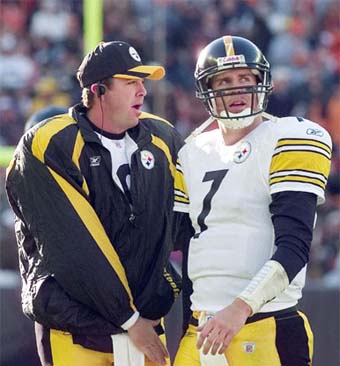 Roethlisberger came in with limited experience at the quarterback position, playing the position just one year in high school and leaving Miami of Ohio after his junior year. But as history has shown, it was a pick that has paid dividends, with Roethlisberger leading the Steelers to two Super Bowl titles while breaking countless records along the way.

But it all started during the NFL Draft, and here is a look back at what Roethlisberger had to say immediately after being drafted by the Steelers, and what then Coach Bill Cowher said about him.

On if he thinks it’s possible he could start as a rookie:
“I don’t know, if they ask me to then I will be ready to do whatever I can. The big thing is that hopefully, if Tommy Maddox is willing to, I would like to learn as much as I can from him being a veteran and the quarterback there that he is. I am more than willing to learn everything that he is willing to teach me.” 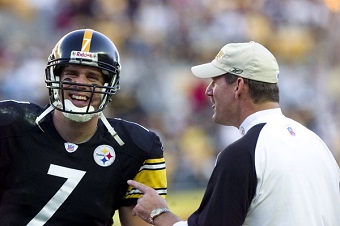 On what he likes about the way Roethlisberger plays:
“When you look at him athletically, a lot of people have talked about athletically he may have a lot better attributes than some of the other two picked in front of him, but I think certainly the experience factor, certainly the questions of where he played.

“I think this kid has a lot of upside. Again, the thing he lacks is experience. I think he’s only going to get better the more he plays.”

On what sold the team on selecting Roethlisberger:
“The more you studied him, just when you watched him, the more information you gathered on him, I think you looked at those three quarterbacks, and they clearly separated themselves I think from the rest of the group. So it was just putting them in order.

“The more you watch the guy, his arm strength, his mobility, his accuracy on the run, on the move. I think you look at our situation, it was an ideal situation for him to come into.”

“If there is a situation for a young quarterback to not come in and feel the pressures of having to turn a football team around, we think this is one of those situations that exists.”