Home/News/Thursday: Ben on 93.7 The Fan
Previous Next

“We’re excited. This Sunday we’re going to have the Second Annual Ben Roethlisberger Foundation Fundraiser. It’s up at Jergels, and a bunch of teammates are coming and coaches, and we’re raising money for The Ben Roethlisberger Foundation which benefits Make-A-Wish, which to me speaks for itself. It’s so awesome to grant wishes to kids who may not have many wishes left. That to me is an awesome thing.

“And another part of it is we buy K9 dogs for police departments and fire departments all over the country. They’re K9 dogs, bomb sniffing dogs, drug dogs – and to me where it really comes into effect when after this Boston Marathon bombing, we’ve given some grants to the Boston police department when we play the Patriots – they’ve used some of the grants and some of the money to help with the aftermath of that event. To see it in action is a really neat thing.” — Ben on his fundraising event this weekend.

Ben was a guest on the Vinnie & Cook Show this afternoon, and among the other topics he discussed: the off-season workouts, more comfort with the offensive schemes, being part of the “08’ers” club – a small but elite group, an update on Heath Miller and his upcoming children’s football camp! 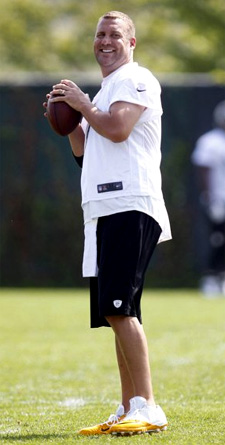 “I think last year it was new for all of us, so it was Todd’s offense that he brought to us. This year, I would say it’s more ‘our’ offense. We’ve added things, we’ve deleted things, we’ve all kind of put in our input, players and coaches. Todd’s open to change, and the things we need to improve on to be the best we can be, I feel we’ve done a good job of improving on.”

There’s not a lot of us old guys left anymore, so to me, I’m enjoying the opportunity to be a different kind of leader than I’ve been the last couple of years.

I pulled aside a couple of young guys today, said a few things to them, and I really felt like it resonated with them. To see these guys look at you and have an almost fatherly look towards you–man I’m really old! It’s fun (laughs).

It’s weird, because I’ve been so used to after my reps in practice kind of going and talking to the receivers or the tight ends or running backs and focus kind of on the plays – what just happened, because I was so used to doing it, because I knew Byron and Charlie knew what the heck they were doing. So I never had to worry about help coaching them or whatever.

Now, I get caught trying to help more, because the first two days, Bruce [Gradkowski] came and said, ‘Did you see this, this, and this?’ And I’m like, you know what, I didn’t, because I was doing something else, and I feel bad. So I’ve really made an effort to kind of watch those guys and help.

Day one, coach Tomlin asked for anybody that was with the Steelers in 2008 to come into the meeting room, he wanted to talk with us. He kept all of the other guys out and so, I don’t know the exact number, but there weren’t very many of us. So we now have a nickname called the 08’ers and there’s very few of us, and coach basically said that he’s going to cater this OTA’s, camp, and practices to the young guys, because they’re the majority now, and we’re the minority.


On his ProCamps Football Camp this summer –

The Football Camp is coming up in a couple weeks…that always gets on us pretty qwuick. we have like 500 kids running around (laughs) in Seneca Valley. That’s a blast to me, I’ve been doing this camp now for, jeez, five years maybe? because two years ago I decided to line up all 500 kids, two lines, and send ’em out and I threw a pass to each kid. It turned into such a hit that I did it again last year, and I’m sure I’ll do it again this year. A lot of the kids don’t even look around until they’re about eighty yards downfiled they just want to go deep. It’s a two-day instructional camp, I quarterback every team, and it’s just a great, fun time!


You can listen to his full interview here!

“The guy is a winner, he’s a competitor. You put him in the fourth quarter and I will take that quarterback over anybody in the league. The guy is very strong in the pocket, he can throw the ball accurately and he can move. He’s a better athlete than you give him credit for. I think when you look at his numbers, prior to being hurt, they were his best numbers of his career. Yeah, I would say he’s better than that whatever, that No. 61 ranking.” — Bill Cowher, talking about #7, during an interview on NFL Network this evening.