“I don’t ever take it off. I wear it because it’s special to me, but I cover it with tape because I don’t want it to get caught on something and rip my finger off. My wife thinks it’s really neat. She likes it when other people notice that I’m wearing it.” — Ben, on wearing his wedding band. 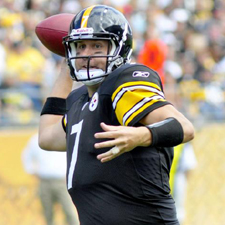 Roethlisberger is part of a small subset of athletes — including a surprising number of NFL players — who compete while wearing their wedding rings, a move that seems both charming and risky.

Most of these players don’t tape over their rings like Roethlisberger does, so there’s always a chance that their rings could get snagged on something. And even if that never happens, what if the ring just gets dinged up? What if another player steps on it? What if it falls off somehow and gets lost?

In the NFL, most of the ring-clad players are quarterbacks and kickers. Or at least those are the ones we know about, because they’re just about the only players on the field who are bare-handed. It’s not clear how many additional players may have rings lurking under their gloves, but there’s at least one: Roethlisberger’s teammate Troy Polamalu. Polamalu declined to comment for this article, but his wedding ring — which is much more elaborate than a traditional band — is occasionally visible when he removes his gloves on the sideline. The ring is even included in the new Madame Tussauds wax figure of Polamalu.

Anyone who buys a new or pre-owned #1 Cochran Buick or GMC between now and November 12th will receive an invitation to an upcoming VIP party featuring an autograph session with Ben!

For more information, stop by #1 Cochran Buick GMC of Monroeville or Robinson for details!


“Ben Roethlisberger leads the NFL in being sacked but is less likely to be hurt because of his size and strength.” — Gary Mihoces, USA TODAY.

From the Cover story for this week’s USA TODAY Sports Weekly: 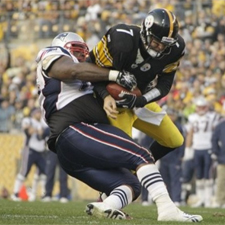 While numerous sacks mean more risk of injury, they don’t always have to mean that all is lost.

In the 2008 season, Roethlisberger was sacked 46 times (second most in the NFL). Pittsburgh won the Super Bowl that season. Last season, Cutler was sacked a league-high 52 times. Chicago made the NFC title game.

This season, Pittsburgh is 6-2 despite Roethlisberger wearing the “sack me” sign on his back. In the 25-17 win Sunday vs. New England, Roethlisberger was sacked five times.

“It (taking a lot of sacks) just makes the road a little tougher,” Ron Jaworski says. “A Ben Roethlisberger, he’s a big, old oak tree back there. He’s barn-strong. I’m thinking of Cam Newton, how he is in the pocket, and Joe Flacco. These big strong guys in the pocket, they’re a little bit less likely to get hurt because they are so big and strong.”

Pick up your copy of USA Today’s Sports Weekly (Nov 2nd-8th) wherever newspapers are sold!

You can check out this photo Ben took of their backstage view here.

“No, I think he has always been a great quarterback. There are always games that you have that are tough for you. Guys fight every week to be the best they can and he is the best at that, as far as I am concerned. He is as good as anybody in the National Football League. He is a great quarterback, he has proved it, and he is playing the way he always plays. He is just a great player.” — Ravens head coach John Harbaugh, when asked if he sees Ben as a different quarterback from the one they played in Week 1.