Home/News/Trending up: Pittsburgh Steelers
Previous Next

From Scott Brown today at ESPN.com: 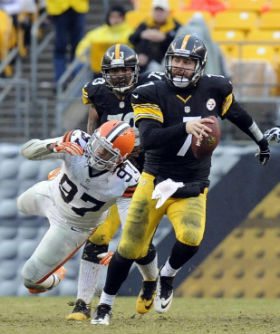 A strong finish that nearly propelled the Steelers into the playoffs following an 0-4 start has positioned them to return to the postseason following a two-year absence.

That is the consensus of the eight ESPN NFL Nation reporters whose teams they cover were designated as ones trending up after missing the playoffs. All eight reporters voted on the order of the teams trending up, and the Steelers finished first among those teams that are most likely to make the playoffs next season.

Ben Roethlisberger is probably the biggest reason why.

He is easily the best quarterback among those on the eight teams in this survey, and he is still in his prime as his play in 2013 showed.

Roethlisberger set a franchise record for completions in a season (375) while also throwing for 4,261 yards — the second-highest total of his career — in leading the Steelers to a 6-2 record in the second half of the season. Roethlisberger will be complemented in 2014 by a ground game anchored by Le’Veon Bell, who could develop into the Steelers’ best running back since Jerome Bettis…