Home/News/Tuesday: Big Ben’s Q&A with the media
Previous Next

“The goal is always to get better. Coach Hep always said, ‘You either improve or you deteriorate, you never stay the same.’ I want to keep getting better physically, mentally. I still feel like my best football’s ahead of me.” — Ben

Ben spoke to the media this afternoon before practice and was asked about the Steelers season finale against the Cleveland Browns at Heinz Field: 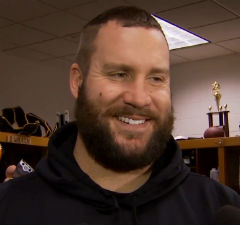 We’re going to give it everything we have and play every play like it’s our last!

They have the right. If a team goes undefeated and [starters] don’t have to play the last two or three games then they shouldn’t have to. It’s up to them. I think a lot of players would want to play unless they aren’t quite healthy and want to get that extra rest. Every team, every situation’s different. Some people take the mentality of let’s let some guys rest. If you’re pretty banged up it’s a good opportunity to get rest. If you’re playing pretty well it’s a momentum thing. You can keep going and build your way into the postseason.


On his health this season –

I haven’t missed a day of practice I don’t think, have played every snap, knock on wood. I give credit to the line they’ve done such a great job of keeping me clean and I think that extra working out I did this offseason really paid off as well.

We’ll do Christmas Eve with my family tonight and Christmas with ourselves and [Ashley’s] side of the family tomorrow!


Ben is also is asked about those hurdles from Le’Veon Bell, scoreboard watching, sacks, holding the ball “too long”, and jokes about his running touchdown in the Packers game!


You can watch video of his full interview here.

After a win over the Packers and a few other things the Steelers needed on Sunday, playoff hopes are still alive.

The Steelers need to beat the Cleveland Browns in the season finale and hope to get help.

“If we don’t take care of our business it doesn’t matter what anyone else does,” Roethlisberger said. “We expect everything from them. It will be a typical AFC slug fest.”

If the Steelers don’t get the help they need, it’s still important to Ben to go out with a win.

“I have always had the goal to never have a losing season,” Roethlisberger said. “I know 8-8 is not a winning season, but it’s not losing either. We got to try and get this one.”


You can read more here (unfortunately, there is no audio for today’s show).

Congratulations to both Ike Taylor, 2013 recipient of The Chief Award, and Le’Veon Bell, recipient of the Joe Greene Great Performance Award!

In the spirit of the holiday, stop by Steelers.com to listen to Coach LeBeau recite “Twas the night before Christmas”!