They haven’t been teammates for long, but if there is one person who knows Ben Roethlisberger well in the Steelers locker room, it’s Vance McDonald.

The two have lockers next to each other at the UPMC Rooney Sports Complex, but they just don’t bond together in the locker room, they are also close outside of the facility where they spend time together with their families. 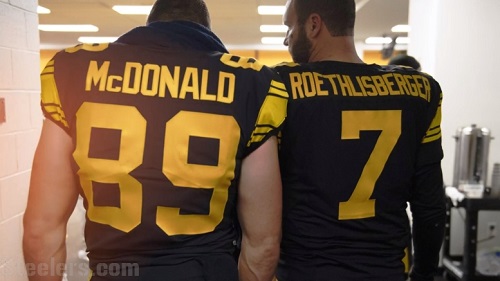 McDonald knows what last year was like for Roethlisberger, how frustrating it was for him to miss almost the entire year after suffering a season-ending elbow injury. That is why it excites McDonald to see Roethlisberger back the way he is during the team’s training camp.

“I would say he is all the way back, for sure,” said McDonald. “This is the most I have ever seen Ben in terms of his hunger for winning a championship. I can respect that being down last season made it more real for him. Going through a heavy surgery for a quarterback and where he is now, it made him hungrier. The way he attacks the day is different. I am loving the leadership from him, the hunger, the fire. You will notice that trickle down to the entire offense. Guys are just flocking to him. The hunger is real from Ben.”

While McDonald is seeing Roethlisberger in camp now, he also worked with him this offseason when players got together on their own.

“He was pushing some of his throws and arm action to test it, whether to build confidence at that point,” said McDonald. “He was making some insane throws off his back foot, cross field to Diontae Johnson running through the end zone to the back pylon. I remember thinking at that moment, ‘golly, he is really back.’ It’s crazy and awesome to see.”