“Shoot, you get a chance to play in the AFC Championship Game, it’s always gratifying, no matter who you are playing. Like I said, it’s an awesome challenge that we get to go play [the Patriots], kind of ‘the team’ to beat.” — Ben.

Recap from Teresa Varley, at Steelers.com: 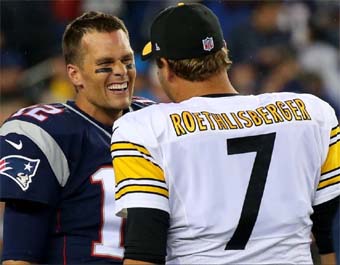 Ben Roethlisberger remembers his rookie year in 2004, when cornerback Chad Scott spoke to the players about how special it is to play in an AFC Championship Game. He told them it’s not easy to get there, and it’s something you have to appreciate.

Roethlisberger said he took it in, but after playing in the game in 2004, and then winning Super Bowl XL in 2005, thought maybe it isn’t that hard.

But after not being to the Super Bowl since the 2010 season, and not winning one since the 2008 season, Roethlisberger knows it’s not an easy thing and he is now sharing that with the team’s younger players.

“Chad Scott got up and spoke to the team, said just don’t take this for granted, how hard it is to get there, and those kind of things,” said Roethlisberger during the Steelers’ AFC Championship Game press conference at the UPMC Rooney Sports Complex on Wednesday. “You hear it and the next year you go and win a Super Bowl and you think, maybe it’s not as hard as he talked about.

‘This moment’ that Roethlisberger refers to is Sunday’s AFC Championship Game against the New England Patriots at Gillette Stadium. It will be the third time that the Steelers have played the Patriots in the championship game, and the second time it will be Ben Roethlisberger vs. Tom Brady in the AFC’s biggest game of the year.

While it’s a selling point for many, Roethlisberger knows it’s about more than the two quarterbacks.

“I think it’s two old guys playing this game for a long time,” said Roethlisberger. “That is what a lot of the talk is. He deserves all the credit that he gets. It’s bigger than the two of us. I know he is used to it.

“This is two football teams that have won championships that are going against each other. It’s more than just one man. We aren’t playing tennis. We are going out to play a football game with 11 guys at a time.

“At the quarterback position you get used to it. When you play games, you hear a lot of talk about quarterback vs. quarterback because that is the sexy way to talk about games. But I am sure if you ask him, he knows it’s way bigger than just the two of us.”

Roethlisberger, who earlier this year asked Brady for his jersey, and got it, said he did so because he considers him one of the best, ‘if not the best’ of all time. He also has the same kind of respect for the Patriots as a whole.

“They are the best in the world,” said Roethlisberger. “They are the gold standard if you will. You want the opportunity to go up and play the best. It will be an awesome challenge for us.”


You can read more from Ms. Varley’s recap & listen to Ben’s interview for yourself here.