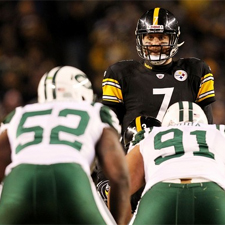 Do you enjoy playing against elite cornerbacks like Revis?

You like a challenge. He’s one of the best to play the game at that position. We faced one last week in Champ Bailey and this is the same way.


How would you evaluate the offense’s performance against Denver?

I thought we did pretty well on offense. We obviously had some negative plays but I thought we had a chance to win the game. We played well enough if I didn’t make a mistake at the end of the game.


Re: Having more freedom calling plays in the no-huddle:

A lot of those runs, even though we were in the no-huddle at the end of the first half and most of the second half, I was calling a lot of those runs. I think people need to realize that just because we’re in the no-huddle and we’re calling the plays doesn’t mean I’m calling all passes. We broke it down between runs and passes and it was pretty balanced. As a quarterback, you just want to call the best play, run or pass.


Re: Why the team ran three receiver sets so many times against Denver:


Re: The plays you have to choose from in the no-huddle:


Re: Being sacked five times against Denver: 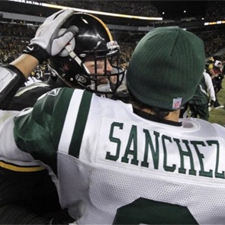 Is there a sense of urgency to avoid a 0-2 start?

The Super Bowl was not won or lost last week and probably isn’t won or lost this week. It makes it a little bit harder with every loss but we’re just going to come out, play good football, and keep trying to get better.


Do you think other teams feel that they need to keep the Steelers offense off the field?


How tough would it be to play in a two-quarterback system like the Jets sometimes use?

It’s got to be tough. I feel bad for [Sanchez]. Obviously, they blew out Buffalo so it wasn’t as big of a deal but I know it wasn’t easy. During the game last week, Tebow came in and lost two yards and then Sanchez came back in and the commentator said, “Hey Tim, thanks for losing me two yards.” It’s got to be hard because as a quarterback you want to stay in a groove but the Jets always do some unconventional things.

You can also watch video of his interview here. 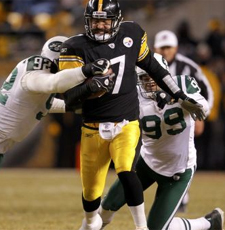 On playing against Ben –

“It’s amazing, when you look at his quarterback rating at Heinz Field, I believe it’s 107. He’s tough, there’s no question about it. He does a great job in a traditional offense, but he also does a great job staying alive, making a guy miss, extending plays. Then those receivers really come to life. You have to do a tremendous job on them.

You can never assume that Ben is down. I think that’s something that over the years I’ve learned, he can make every throw, a big, strong kid and a better athlete than what you think a guy of his size would be.”


On playing that offense –

“Very physical football team, huge offensive line. They’re running more two-back runs. It’s more like old-fashion Pittsburgh football, so we have to be ready for that, the running game, so it’s a huge challenge. Interesting personnel when you look at Pittsburgh’s, all that speed on the outside, everyone knows about [Mike] Wallace, but [Antonio] Brown might be one of the most underrated players in football. Underrated, he still made the Pro Bowl last year, but I believe he’s the only receiver in NFL history to have over 1,000 yards as a returner and over 1,000 yards receiving in the same season. Obviously, he’s a special talent as well. They have a throwback tight end, who’s the real deal in [Heath] Miller.”


You can read more from Coach Ryan here.