Fan voting concluded at the end of the Monday Night Football game two days ago and the results are in: 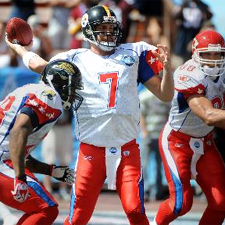 Ben was also in the Top Ten in overall votes, finishing 8th.

The Pro Bowl teams will be announced on December 27th, at 7 p.m.

Thank you to everyone who voted for Ben and his teammates!


Steelers Depot has a complete rundown of the players and votes.

You can watch/listen to Part III of the Steelers Christmas carols here (although you may want to mute it!).