Ben spoke to the media this afternoon about the Steelers upcoming game with the New York Giants, Max Starks, Heath Miller, and Eli. 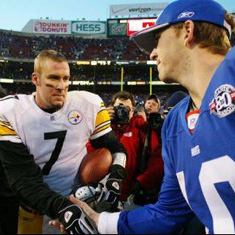 On those affected by Hurricane Sandy –

Your heart goes out for all the families, the people, everybody up there that is going through a really tough time right now. It’s just a crazy thing that’s going on right now. Like I said, our thoughts and prayers are with everybody.

I couldn’t be more proud of him. He’s a new dad. It’s awesome to have him out there because I’ve got so much confidence in him having my blind side. I just always know that he’s going to be a guy you can trust and count on. He’s been there for this organization and for me for a long time.


On whether he is looking more toward TE Heath Miller this season, particularly in the red zone?

Yeah, I mean he is who he is. He’s a great player. I just have comfort in him. It’s not necessarily because we call more plays for him. It’s just the way it is. He’s getting open and we are calling some more things for him.


On whether he thinks he or Eli Manning is the better quarterback from the 2004 Draft?

Eli. He’s got the most recent championship and he’s a good player. I’m happy to be here and he’s happy to be there I’m sure.

You can read his full interview here.

Ben was a call-in guest on ESPN’s Mike & Mike this Halloween morning!

If you missed it, you can listen to the full interview here.

Ben on the Cover!

Ben will be featured on the Cover of the November, 2012 issue of Nightwire magazine, and in an article entitled, “Football – A Family Tradition” by Stacy Kauffman.


You can check it out here.