Big Ben met with reporters today before practice. Among the topics he was asked about was the use of the wildcat in last Sunday’s game, the running game, field goals vs touchdowns, traveling to the West Coast, and the play of teammates Derek Moye and Fernando Velasco. 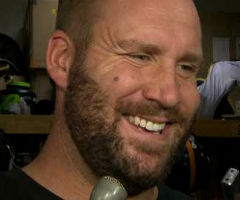 The “Black Hole” is a place that can be dangerous for teams, especially from the East Coast.

It’s a great environment. Crazy fans, a lot of history there.

That’s what makes it neat going there, the fans, the history, the things you see on TV and you hear about from other fans and players.

[Laughs] It’s not that I don’t like it. If it helps us win, I’m all for it. I just told Coach, I get actually physically tired running out to wide receiver all the time [laughs again].


Can they take a free shot at you out there?

They can. I’m a little bigger than those defensive backs. I wouldn’t want them to try it. [Laughs]


Are you watching for that when you’re out there?

No, last week I think it was so confusing – I know a couple times the defensive back over me didn’t know what to do, if he should cover me, if he should run in. So, I’ll be alert for it. If a guy comes up and he looks like he’s about ready to hit me, I’ll protect myself.


When was the last time you caught a pass?


There was a Forbes poll released (1,100 people 13 yrs and older were surveyed) of the most hated players in the NFL. You were number four. Seven of the 10 were quarterbacks. Is there something to that?

I think a lot of people don’t like us because we’re usually the ones that help beat their team, so it is what it is.


Does that bother you at all? Or don’t you really care?

No, I don’t really care.


How much is the emergence of the running game Sunday going to help this team?

A lot. I’ve always [talked] about being balanced and I think if we can continue to be balanced and really utilize Le’Veon [Bell], Felix [Jones] and Jonathan [Dwyer], it helps keep defenses on their toes with play-action, and then them catching the ball out of the backfield as well.


How concerned are you that you’ve had more field goals than touchdowns the last two weeks?

We always count on [Suisham] to make them, but we can’t keep relying on that. We’ve got to score seven points. That’s frustrating as a quarterback and as an offense because when we get down there we know what we want to do and what our goal is. We have to find a way to get it in the end zone.


From an emotional standpoint, do you think the jolt of momentum from beating the Ravens will have an effect?

To me, it’s over. This is Oakland week. It’s about moving on and getting ready for them because this is another great defense and a tough place to play.


Is it any harder to play out there?

No. To me it’s more fun because you think of the people that have played in that stadium, the tradition, and the history. Those are the things that I like about it. I like to see the rookies and young guys that haven’t been out there, the first time they walk on the field and see the fans and the kindergarten teacher that’s got her face painted and going nuts. To me, it’s a neat thing because that’s what football is about.


You had an opportunity in the red zone and Derek Moye couldn’t hang onto the pass. Do you say anything to him?

No, just I’m coming back. I’m not going to shy away from throwing you a pass or coming to you the next time we’re down there, in the field, wherever it is. I don’t think a lot needed to be said to him. I don’t get on him. It was one play that wasn’t made and I’m sure he’ll make it the next time.


How reassuring is it when you get to the 30-yard line that you’re probably going to get three points because your kicker has been in such a groove?

It’s very reassuring. The problem is we maybe get too comfortable with it. We need to start thinking he’s going to miss or something, even though we don’t want him to, because we need to score touchdowns. I always tell him that, “I hope we don’t use you for anything but one point after a touchdown.” We need to be better down there.


How much is traveling to the West Coast a negative for you guys?

Just the batteries on the computer don’t last that long. [Laughs] Honestly, it’s so much the same. We leave at the same time, we get out there – we leave at 2:00, 2:30, whenever it is normally, no matter where we fly to. Some things get changed on the schedule but you can’t look at it as an excuse because it is so much the same as what it is out here.


Re: Level of comfort with Fernando Velasco:

Yeah, very comfortable, obviously. We’ve been doing good. Communication has been great. Center-quarterback exchange has been good. You’ve got to give him a lot of credit. I’ve said it a thousand times that he’s filling in for the best center in football and he’s done a great job. My hat’s off to him.


You can read more here, and listen/watch his interview here.