“I don’t know whether it’s ‘out of our control’, I could have played better and then it is in your control. You just can’t play bad football against a good football team….I just didn’t play well enough.” We’re not going to put [the game] in the refs’ hands, like I said, we just need to play better football. Like I said, we didn’t play well enough on offense. — Ben, answering questions after the game. 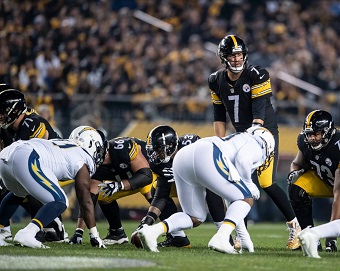 The Steelers saw a 23-7 halftime lead disappear, falling to the Los Angeles Chargers, 33-30, on a field goal with no time left on the clock.

The loss has the Steelers at 7-4-1, still holding on to first place in the AFC North, just a half-game ahead of Baltimore, 7-5.

The Chargers had 23 unanswered points in the second half, taking a 30-23 lead.

The Steelers tied it at 30-30 with 4:10 to play when Ben Roethlisberger connected with Jaylen Samuels for a 10-yard touchdown.

But the Chargers wouldn’t go away. Philip Rivers drove them down to the 21-yard line, where kicker Michael Badgley had three opportunities to make a field goal. His 39-yard attempt went wide left, but Joe Haden was offsides. A 34-yard attempt was blocked by Artie Burns, who was flagged for offsides on the play. The third attempt, a 29-yarder, gave the Chargers the win.

“We didn’t get it done today,” said Antonio Brown, who had 10 receptions for 154 yards and a touchdown. “No excuses need to be made.”

Ben Roethlisberger, who completed 29 of 45 passes for 281 yards, two touchdowns, and an interception, said he should have played better and summed it up simply.

Injuries also mounted for the Steelers in the game, including James Conner leaving in the fourth quarter with a lower leg contusion.