Instead of the usual post-game update, we’re going to make it a Steeler Nation Sunday and let the fans take over with their post-game thoughts from our social media pages:

Swinging his #terribletowel in his @_BigBen7 jersey at today's victory. pic.twitter.com/oL1bSlUTBu

@_BigBen7 WHAT A WIN TODAY! Happy STEELER ladies in the house!✨ pic.twitter.com/mUC9Aoq42R

Dee Brown One game at a time .. that’s the key ! You guys looked great .. so proud of the team effort !!

Candace Gearing Congratulations Steelers, We Love ya All and have Faith in you guys. From The Gearing Family

Dianna Thomas So happy that my Steeler’s won. I heard nothing but flack all day here in Ohio until the end of the game. Seems as the Bengal fans have nothing to say to me now. Love you guys!

Chris Abrams Best Quarterback all time in my opinion! Always has been of great character. #BigBen #Black&Gold

Letrice Pollard They did show the game were I was ben but I heard and got updates. Great game, black and yellow all day the ultimate steelers fan, superbowl baby

Richard D. Cofer Who Dey Think They Going To Beat Them Bengals. The Mighty Steelers! That’s who!

Peggy Stough What a game—you bet Big Ben is the best quarterback in the NFL!!!

Marcy Luszczynski LOVE YOU BIG GUY!!! SO PROUD OF YOU!!!


And a BIG SHOUT-OUT to Regios de Acero!! 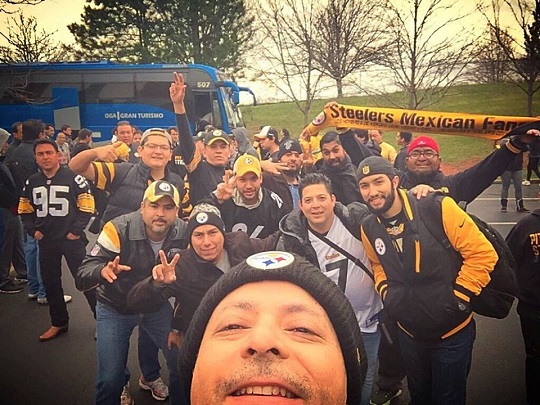 60 members of this Steelers Mexico Fan Club traveled all the way from Monterray, Mexico to watch their Steelers beat the Bengals!! Thank you for bringing them good luck and have a safe trip home, friends!!

And just in case you’d like to hear from #7 himself….

You can catch his post-game press conference – Ben talks about Heath Miller being one of the best teammates he’s ever had, joking with Andy Dalton about the pregame scrum, and his success playing in Cincinnati.