The Steelers earned a much-needed 30-20 win from the Bengals on Sunday at Heinz Field. Ben completed 20 of his 25 passes, and Le’Veon Bell ran for 117 yards.


“I’ve said for a bunch of weeks now, there’s going to be no quit from me or from anybody. I thought tonight was a good night and a good example of that. Everybody fought hard from start to finish and I was real proud of how everyone played.” — Ben, post-game.

From John Dudley at the Erie-Times News this morning: 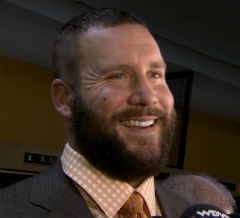 Ben Roethlisberger, in the midst of his best season, reached another milestone in Sunday night’s 30-20 win over the Cincinnati Bengals.

Roethlisberger broke his own franchise single-season completions record of 337 and now has the three highest single-season totals in Steelers history.

Wideout Antonio Brown, the biggest beneficiary of those throws, became only the second Steelers player with at least 95 receptions. He trails single-season leader Hines Ward, who had 112 catches in 2002.

“It’s a blessing,” Brown said of nearing Ward’s record. “I had an opportunity to see Hines today. He was really encouraging. As this thing continues to unfold, I just want to continue to excel with the team and play as a team and help us win games.”

Roethlisberger completed 20-of-25 attempts for 191 yards with one touchdown and one interceptions. He was sacked only once.


You can read more from Mr. Dudley here.

“We just wanted to come out and play as hard as we could, show we’re going to give it everything we’ve got to the end.” — Ben

From Alan Robinson, at the Pittsburgh Tribune-Review:

The Steelers turned a succession of special teams mistakes by the Cincinnati Bengals (9-5) into a club record-tying 21-point first quarter that featured an Antonio Brown touchdown catch and 67-yard punt return score, and they beat up on their division rival 30-20 at Heinz Field.

The first-place Bengals were favored to win in Pittsburgh for the first time since 1989, but it was the Steelers who turned back the clock with a vintage performance that made their fans wonder where this had been all season.

Ending a two-game losing streak that left them with only a mathematical chance of reaching the playoffs, the Steelers (6-8) staved off playoff elimination and delayed the Bengals’ AFC North title-clinching for at least another week. They also badly damaged Cincinnati’s chances of securing a wild-card weekend bye.

“They’re at the top [of the division], but we wanted to come out and play a complete game. I wish we could have finished better. … But it was a W, and that means more than any personal records.” — Ben

You can check out Ben’s post-game interview here & some photos from the game here!