“I’m not looking around. It’s all about focus. This game is over now. That’s all we can control.” — Ben, on post-season speculation.

From Will Graves, AP: 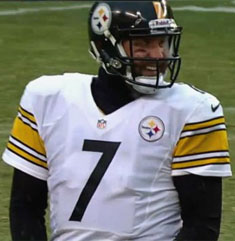 Their horrendous start has long been forgotten, erased with an equally unexpected turnaround.

The Steelers are in contention, right back where they belong. The playoffs are possible.

Ben Roethlisberger threw touchdown passes to Antonio Brown and Emmanuel Sanders and beat Cleveland for the 16th time as Pittsburgh, which opened the season with four straight losses, pushed deeper into the postseason picture with a 27-11 win over the Browns on Sunday.

The Steelers (5-6) have climbed back with a one-game-at-a-time philosophy that they’re not about to abandon.

Roethlisberger connected on a 41-yard TD pass to Brown in the first half, and hit Sanders on a 4-yarder in the third quarter for the Steelers, who only have a few days to get ready for a Thanksgiving game at Baltimore — a matchup that didn’t look as if it would be very meaningful a few weeks back.

Roethlisberger finished 22 of 34 for 217 yards and improved to 16-1 against the Browns (4-7), who have lost five of six and seen a promising season turn into yet another miserable one.

An Ohio native, Roethlisberger relishes beating a team from his home state.


You can read more from Mr. Graves post-game report here.

“Everybody was saying they aren’t the same Pittsburgh. But at the end of the day they did what they do best.” — Willis McGahee, from the column below. 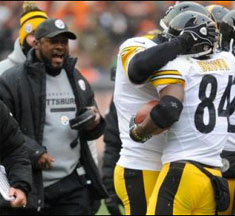 As part of his ownership stake in the Browns, Ben Roethlisberger might be tempted to pitch city council today on the deal to renovate his personal lakefront playground.

Who has more fun in this place? (Not you or me, certainly).

Who feels more at home? (Not any of the 117 or so quarterbacks who’ve started games for the Browns during Roethlisberger’s career)

If the first 15 times didn’t convince you, the 16th should. That’s Roethlisberger’s record against the Browns now: 16-1. Which is only ridiculous.

Even with the mental agility of a sports writer, it’s easy to detect not only a trend there but to conclude that maybe the quarterback matters.

The Browns never got Roethlisberger to the ground. They missed the few opportunities they had.

“He’s a great player,” said Rob Chudzinski. “You know what you have to do. It’s just hard to do it against him.”


You can read more from Mr. Shaw’s column here.


If you missed Ben’s punt in the fourth quarter or would just like to watch it again, you can do so here!

You can also see a few game photos of #7 in action here!

Congratulations to Ben! He was named the Steelers Digest Player of the Week!