What does a young Pittsburgh fan do when the Ravens’ #27 comes to visit?

Home/News/What does a young Pittsburgh fan do when the Ravens’ #27 comes to visit?
Previous Next

What does a young Pittsburgh fan do when the Ravens’ #27 comes to visit?

He reps his Steelers #7 with pride!


From Sarah Blumburg at the Capital Gazette: 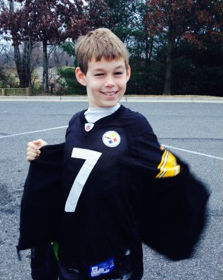 When word got out that Ray Rice would stop by Davidsonville Elementary School in Maryland, Colton Swank got an idea.

“I had to show my support for Ben Roethlisberger,” he said.

Just like his parents, the 9-year-old has always been a fan of the Steelers, especially the quarterback.

“Thanks for the support, even the ones sporting the black and gold,” he said.

Colton sat up and displayed his jersey proudly!

Rice surprised more than 700 students Wednesday, in an effort to teach students the importance of making healthy choices and staying active.

For more than a year, the school has worked to promote better health choices. For their efforts, the school was named a Touch Down School through the national “Fuel Up to Play 60 program“.

Even though Colton isn’t a Ravens fan, he believes being active is important and was happy to see that Rice was promoting such a vital cause.

“In the NFL you have to be healthy,” he said. “Even the Steelers practice that.”

Colton is in the fourth grade at an elementary school near Annapolis where the predominant team here are the Ravens. The photo was taken the morning of Ray Rice’s visit when I dropped him off at school. I watched him walk into the school, and he was immediately greeted with a shove by another student wearing a Rice jersey who told him, “You got a lot of nerve wearing that!”.

It’s always like a Ravens-Steelers rivalry in miniature, but Colton is really good-natured about the whole thing. He admits it’s difficult the day after a loss and facing the Ravens fans at school. He loves it though when we are able to attend a Steelers game once at year around Christmas time when we come back to town and he is surrounded by his fellow fans.

The Steeler Nation is strong and starts young!

The first time Ray Rice tried to hug him, and Colton winced, Ray Rice announced that he, “wasn’t getting the love from Roethlisberger.”

After the event, Ray Rice did succeed in hugging my son. He asked Colton if he was his favorite Raven. Colton smiled, but couldn’t bring himself to say something like that and just replied, “it depends”.


*Thank you to tough & true Steelers fan Colton Swank and his mom, Amy, for sharing their story!