…but they’re also humans that go through things that everyone goes through, and so do their families. Not only did I want to let people know what I was going through, I wanted to say: It’s OK to be scared, regardless of your situation.” — Kelly Stafford.

From ESPN.com: Kelly Stafford’s recovery from brain tumor – ‘My biggest fear is not being here’

Editor’s note: Kelly Stafford, who is the wife of Detroit Lions quarterback Matthew Stafford, had a tumor removed from her brain in April. Below is her first-person account of the experience. 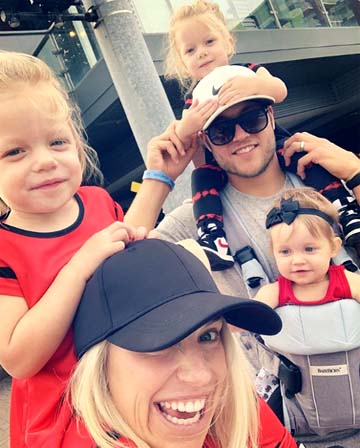 The first moment I was really concerned was last January. I was in Michigan, and had just gotten a massage. When I walked out, I just didn’t feel right. I was lightheaded and it felt like the world was spinning around me. I texted Matthew: “I might need you to come pick me up.” But then I waited a little bit in my car, and started feeling better, so I drove home myself.

A week later, it happened again. This time, I was holding our daughter, Hunter, who was just an infant. The room started spinning around me and I felt like I was going to fall down. I almost threw Hunter to Matthew, because I didn’t want her to go down with me.

Matthew was obviously concerned. “We can’t have this keep happening,” he said. “We need to get you checked out.” He figured I might be dealing with vertigo.

Looking back, there were other moments over the past year where I was feeling “off.” Like when I would show my girls how to do a front roll or twirl in ballet class, then immediately felt dizzy, or like I couldn’t balance. I mean, those were things I had done my entire life, and suddenly they were difficult. Maybe I’m just aging, I had figured at the time. My mom quickly shot that down. I wasn’t even 30.

But you know how things go. Matthew and I have three girls under the age of 2. I had my hands full. As a mom, you’re always on the run. You’re chasing after your kids or worrying about your family. You tend to put yourself on the back burner. So I didn’t feel the urgency to go to the doctor.

The day I almost dropped Hunter, we were heading to California for vacation. At first I resisted because we had so much to do, but Matthew and I went to the ER to get checked out. My blood work looked great. My vitals were fine. Doctors offered to do an MRI, but I said I didn’t have time. So they gave me Antivert, which is a medicine for vertigo, and we left for vacation. The problem was, the medicine wasn’t having any effect on me.

Matthew had looped in the Lions’ team doctor, and he scheduled me to get an MRI, about two weeks later, when we were in California.

A few days after the MRI, we got the results. The medical term was an acoustic neuroma or vestibular schwannoma. There was a tumor sitting on some of my cranial nerves. I was told I needed to have surgery to remove it. And I was terrified.

I shared a lot of my story on social media. It was a discussion that I had with Matthew. Social media for us has been not such a great thing sometimes, considering my husband and his job as quarterback of the Detroit Lions. We’ve seen some ugly things online.

A lot of fans view these men as sports figures and that’s it — just a sports figure. But they’re also humans that go through things that everyone goes through, and so do their families.

Not only did I want to let people know what I was going through, I wanted to say: It’s OK to be scared, regardless of your situation.

When I posted my story on social media, I was feeling really vulnerable, and felt like I needed a bunch of people on my team at that point. I prefaced it in a way that I wanted prayers, more than anything. The more people who are praying for you, the more success you’ll have in anything you’re praying for.

I’ll say this: Detroit and Michigan really showed up. The Lions were incredible. They told Matthew to take all of the time and space he needed. And then, there were the fans. The amount of letters that poured into the facility — so many prayers, a lot of holy water — it was remarkable. Matthew joked that our house looked like a bootleg flower shop.

This state can be tough on its athletes, especially one that has been here so long. We’ve been here for 11 years now, and I had never really taken to this state as much as I wanted to … until now. Because the support that these people gave me — you can tell how much they love him by the support they gave me. I was truly grateful for it all.

I’ve only gone to one football game this year. They’re exhausting for me — I mean, I feel like Lions games are always exhausting for everybody, because every game they play, I feel like it always comes down to the last play — but the noise and constant action would be tough for me. This football season, in general, feels different for us. We have a different outlook. Matthew is still going out there and doing everything he can for the team, but going through this, you realize that in the end, family is the only thing you have.

So we’re just making sure we have our family and that we’re kind to everybody. Those are the things we focus on.

If there’s anything I want people to take away from my story, it’s for mothers. If you ever feel the slightest bit off, you need to take the time to get it checked out. You don’t have to put everything on your back. Sometimes, you need to take some time to make sure you are OK.

These days, I feel pretty good. Days are longer. Some days are hard — some mornings I wake up a little foggy, and know I have to take the day a little slower. It’s rarer for me to get dizzy. Background noise can be tough (but also good — sometimes I don’t hear what I don’t want to hear).

The doctors said it would take about a year for me to feel symptom-free and have the same energy I had before. Thursday, Oct. 17, marks six months. I’m really excited to hit that marker.

Prayers of strength, love & positive energy to the Stafford family!!