Home/News/Adams on Ben: ‘The guy was in a zone’
Previous Next

Steelers offensive linemen loved what they saw from quarterback Ben Roethlisberger on Sunday. 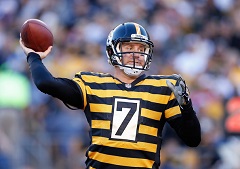 The smile on Mike Adams face said it all about what it was like for the offensive line during Sunday’s game against the Indianapolis Colts. Not only was quarterback Ben Roethlisberger not sacked, but he became the first quarterback in NFL history to throw for 500 yards in a game twice in a career.

When the announcement came across the Heinz Field PA system of that accomplishment during the game, you could see from the offensive line’s reaction that they were pumped.

“We were hype,” said Adams, still fired up about it the day after. “That says a lot about the line that he had time to throw almost 50 passes. I know he felt good back there. We felt good. It was a fun game, one for the ages.”

Roethlisberger, who also recorded his 100th regular season win in the 51-34 victory, completed 40 passes for 522 yards and six touchdowns with a quarterback rating of 150.6.

“The guy was in a zone,” said Adams. “He went out there and had a great game. It was something that was awesome to be a part of. To be the only guy to have two 500 yard games, and to be in there for one of them is something you will never forget.”

Center Maurkice Pouncey joked about it being an okay kind of performance for Roethlisberger, then quickly went on and on about how special a player he is.

“It’s exciting, we got to share that memory with him. It will always be in our mind that we helped him achieve that. For the offensive line not to have any sacks, we just want to keep building on that and see how things go next week.”