From the AP‘s Dave Skretta today: 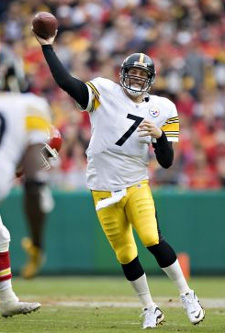 It would take a lot more than a banged up thumb to keep Roethlisberger out this week. The Steelers (7-3) are a half-game behind Baltimore (8-3) in the tough AFC North, with Cincinnati just a game back, heading into this week’s games. They have a good opportunity to pick up a win on the road against the Chiefs (4-6), who have lost three straight and been ravaged by injuries all season.

“I’ll be out there, I guarantee that,” Roethlisberger said. “It won’t be an issue that way. Will it be an issue with pain and throwing? I don’t know.”

The truth is that Roethlisberger seems to play better when he’s ailing.

There have been numerous concussions, several knee injuries, and a fractured thumb sustained a few weeks ago against Cincinnati. Roethlisberger plans to play tonight against Kansas City, even though he admitted it’ll be painful, and that’s dreadful news to the Chiefs.

“He’s an extremely intense competitor,” Steelers coach Mike Tomlin said, “and I think adversity such as that brings that out of him. I think it’s a characteristic that all good competitors have.”

From ESPN AFC North Blogger‘s Jamison Hensley in his “Fived nuggets of knowledge about Week 12”:

Best under duress: It seems like Ben Roethlisberger, who has a fractured right thumb, thrives when playing in pain. But there’s no question that he is the best when it comes to handling pressure this season. Roethlisberger is completing 60 percent of his passes this season when under duress, the best rate among qualified quarterbacks.

According to ESPN Stats & Information, “under duress” is defined as situations when defensive pressure forced players to throw early, off-balance or when they were getting hit. The league average for completion percentage while under duress is 38.5 percent.