Ben: ‘I am black and gold through and through’

Home/News/Ben: ‘I am black and gold through and through’
Previous Next

Ben: ‘I am black and gold through and through’

From his Zoom interview today with the media, compiled by Teresa Varley: 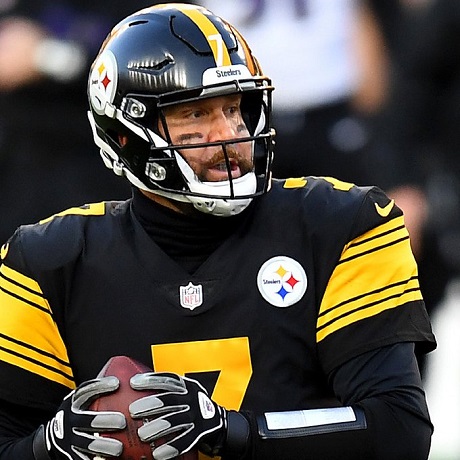 Before the question could even fully be asked, Ben Roethlisberger was smiling and shaking his head.

The answer was an easy one for him.

“I am black and gold through and through,” said Roethlisberger.

For 17 years Roethlisberger has worn the black and gold, playing in a Steelers record 233 games and starting a record 231. So, when the question arose about his Steelers legacy and would he consider finishing out his career anywhere else, there was no doubt. It’s the reason he approached the team about taking a pay cut when he signed a new contract for the 2021 season, his 18th with the team after being selected in the first round of the 2004 NFL Draft.

“It was my idea,” said Roethlisberger of taking a pay cut. “I told them I want to help the team out however we can. I went to them and told them I would do whatever I can to help the team sign guys who are going to help us win football games. I have been extremely blessed to play this game for a long time. That is one of the reasons I wanted to come back. I knew we had a great defense, some amazing weapons on offense. I wanted to come back and be a part of what I think is a special football team that everyone is overlooking, which is kind of cool too. In order to do that, I thought it was necessary to do that.

“I didn’t want to go anywhere. That is why I told the Rooneys and Coach (Mike) Tomlin I want to be here. I don’t want to be anywhere else. This is home to me. I will always bleed black and gold. Almost half of my life has been here playing football for the Steelers. That is why I told them I would take a pay cut to stay here because this is what I believe in, this group, this city. This is home. I am honored to have my career be here.”

Roethlisberger made it clear pretty quick after the 2020 season that he wanted to be back this season. He led the team to an 11-0 record to start the year, while coming off major elbow surgery, but didn’t finish out the year as hoped. He knew there was more left to do, and wasted no time letting the team know his desire to return.

“I felt it was the right thing to do if I wanted to play,” said Roethlisberger. “I felt relatively healthy, all things considered at the end of the season. I just felt like I had more in the tank, and I felt disappointed about the way the season ended and hate to go out that way. I wanted to let them know if they wanted me back, I would give them everything I’ve got.

“I didn’t play well enough at the end of the season, it’s no secret, and I’ll be the first to point the thumb at myself. When the ball is in your hand every play, you have to make plays and you have to play better football. If the quarterback is not playing good football, especially late in the season, it’s directly related to winning and losing. I will take that on me feeling worn down and not playing good enough football at the end of the season.”

It’s a new year and could be a whole new look for Roethlisberger and the offense under offensive coordinator Matt Canada, who is in his first season in the role. Canada brings a different approach, and plenty of new aspects for Roethlisberger to learn. But he is excited about it.

“It’s new. There is a lot of new,” said Roethlisberger. “It’s taking some extra studying, but it’s a fun new challenge. Guys are getting it and hopefully it translates into winning football.

“When you have had the same offense, or a similar offense for 17 years and all of a sudden something looks the same, but it’s called something different, it’s very different and a big challenge. That is the game of football, learning new things, new challenges. Coach Canada’s offense is one that hopefully will be a good one. We need to execute the plays that he calls. Hopefully we will be better on offense than last year.

“We’ll throw a lot of different looks and schemes at people and see what works.”


You can read more from Ben’s interview here or watch it here.