Ben: “It starts with me”

Home/News/Ben: “It starts with me”
Previous Next

Ben: “It starts with me”

From his radio show this morning on 93.7 The Fan: 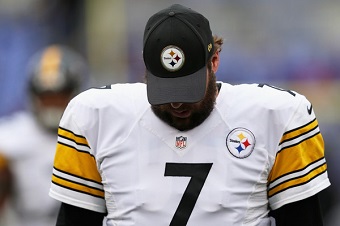 With this being such a shocking and disappointing loss, Roethlisberger was asked if he or the team would be dwelling on the game or if they are singularly focused on their big matchup with the Browns in the season finale.

You got to move on,” Roethlisberger said. “Obviously, Sunday night was bummed, yesterday was pretty bummed, but after you get done watching the film and you have your meetings and you talk about the game, you have to move on. I’ve played this game for a long time and, especially at the quarterback position, you have to have short-term memory both good and bad. So, we move on because this week is the biggest week of the season for us. We have to play great football, we have to bounce back.”

While he has moved on and is focused on the Browns this week, Roethlisberger was asked what the feeling was in the locker room immediately following the loss and what he said to his teammates.

“I would say there was a gamut of emotions. Disbelief, anger, just kind of bewilderment and couldn’t understand that that had just happened. We were all kind of disappointed in each other. I think we were disappointed in ourselves and that was my comment to the guys. I said, ‘It starts with me. We need to look at ourselves in the mirror and really start there with how we point the thumb, not the finger.’”


You can read more & listen to excerpts from his show here.