Home/News/Ben to start Sunday against Broncos
Previous Next 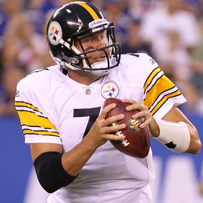 It looks as though Roethlisberger might make his second start of the preseason at quarterback and Dennis Dixon will get his first chance to run the first team after him.

Normally, Roethlisberger starting a third preseason game would be no revelation, but he cannot start in the regular season until at least the fifth game Oct. 17 and the Steelers are trying to prepare Byron Leftwich and Dixon to play in his absence.

“I like playing football, it’s what I love to do, so, if I can get out there, I’ll enjoy it,” said Roethlisberger, who started Saturday night against the New York Giants and played 30 snaps.


You can read the rest of Mr. Bouchette’s column here.

And if you missed Wednesday’s links:

— Ben spoke with the media after practice on Wednesday, you can watch the video here.

— I have added a few more photos from both pre-season games here.