Big Ben and Coach Canada on the same page

Big Ben and Coach Canada on the same page

The Steelers are holding their mandatory veteran minicamp at Heinz Field on Tuesday, Wednesday and Thursday of this week.

From Coach’s interview with the media today:

New offensive coordinator Matt Canada maintained there won’t be any issues relative to what he wants to do and what quarterback Ben Roethlisberger prefers to do when the Steelers have the ball.

“We’re gonna do what Ben wants to do and how Ben wants to do it,” Canada said. “Our job is putting every player in position to make plays. There are changes with terminology, how we’re calling things, which has been an adjustment for Ben. He has adapted easily, just like we all knew that he would.

“But that is our job, matchups are how you win football games. It starts with the quarterback, what does he do well? What does he like? What does he see? What is good to his eye in the passing game? And then we build off of that, and that’s what we’re gonna do. His voice, his vision, what he sees will be what we do.” 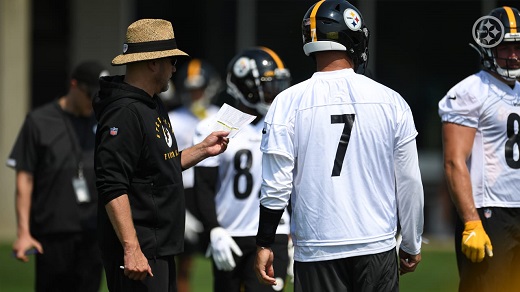 “Ben can do everything really well,” Canada assessed. “I don’t have any concern about Ben doing anything that we want to do.

“If you’re gonna run the football, I think play-action is very important. Mr. Rooney (Steelers president Art II) has sent out a very clear directive to Mr. Colbert (General Manager Kevin), to Coach Tomlin (head coach Mike) and then to me, we want to be able to run the ball when we have to run it. That doesn’t mean we’re gonna run the ball for X-amount of yards in a game. All that matters here is winning. Our charge is to win the Super Bowl, and that’s it.

“Every year you’re trying to create a system to put your players in position to make plays. And to run the football, we certainly believe play-action is a part of that. But that’s not the only focal point we have. We’re gonna run the ball when we have to run it and we’re gonna throw it when we have to throw it. And after that we’re going to do everything we can to get our best players in position to make the plays their talents direct us to do.”


You can read more from Mike Prisuta here.