He received his Bachelor of Science degree in Education from Miami University this morning during Divisional Recognition Ceremonies held at the Millett Assembly Hall.


How could I tell my children one day how important an education is, if I didn’t have one? This is pretty special to me. I’m proud to not just say I’m an alum. Now I’m a graduate. — Ben 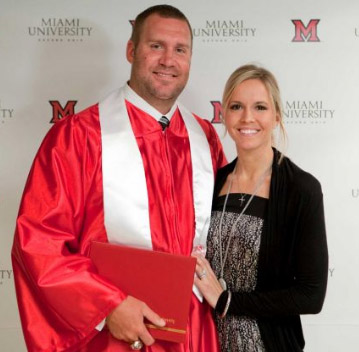 Most of the assembly didn’t know Roethlisberger was coming. When he suddenly appeared in the lineup with his class, the cell phones quickly came out and the texting began.

“I’m going to be sitting there thinking, ‘When I was in college, this person (next to him) was probably in middle school,’ ” Roethlisberger said before the ceremony. “I’m going to be the old man out there, but it’s worth it.’ ”

Worth it, because he promised his parents in 2003, when he left Miami four credits short for the NFL, that one day he would graduate.

“I had every intention,” he said of graduating. “Actually, I didn’t think it’d take this long.”

Roethlisberger’s autumns have been kind of busy. And something always seemed to prevent him from enrolling in time for the winter term. AFC Championship Games, for instance.

But the Steelers were quick outs against Denver the past season and the morning after the defeat, his Miami academic advisor sent him an email. Roethlisberger figured it was a note of condolence. Instead, it was a call to class.

“He responded in less than 20 minutes,” said Melissa Chase, associate dean. “He never asked for a shortcut. It was always, ‘What do I need to do?’ He did everything we asked of him. I know this was always a very important goal for him.”

What they asked of him at the end included a paper on Tibet. “Which I knew nothing about,” he said. Analyzing the New England defense was never like this. But luckily wife Ashley, with two degrees, makes a swell study buddy. He ended up with an A, and possibly more knowledge of Tibet than any quarterback in the NFL.

Done and done. Sunday would be a fine early Mother’s Day present.

“Nine years later,” Roethlisberger said, “we finally got it. When I told my parents, my mom teared up.”

There was never a question of not marching. This day was for the family. Audrey Roethlisberger’s first reaction at seeing her grandson in a graduation gown? “It fits.”


More from the interview/article here.

You can also read an article from MURedhawks.com here.

To see photos taken by others in attendance, click here.

To catch up on all of Ben’s photos in his album, click here.