Home/News/Congratulations to James Conner!
Previous Next

He was selected as the Steelers “2019 Ed Block Courage Award” recipient!

From Teresa Varley, at Steelers.com: 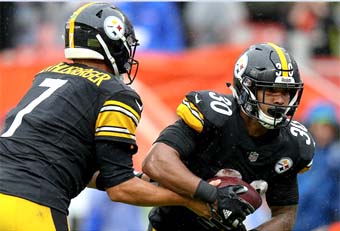 Those two words are emblazoned on James Conner’s arms, one on the right, one on the left.

For those that don’t know his story, they simply might think it’s a description of how he attacks every play, every carry he makes as the Steelers’ starting running back.

But those two words mean so much more.

Because ‘Conner Strong’ is a mindset, one that got him through the toughest time in his life.

And it is that strength that earned Conner the Steelers 2019 Ed Block Courage Award, an award he will receive at the Annual Art Rooney Courage House Luncheon on Nov. 5 at Heinz Field, which benefits Holy Family Institute. The award is voted on by his teammates and given to a player who has shown courage either coming back from an injury or a life-altering situation.

“It’s an honor first and foremost to be recognized, but especially by my teammates, the ones I am with every day,” said Conner. “They are the ones I go to practice with, compete on the field, essentially go to war with. For my teammates to vote for me shows the mutual respect we have for one another and it’s such an honor to win this.”

In Conner’s situation, it was definitely a life-altering situation that had his teammates voting for him.

He is very happy when Big Ben is at practice –

“Yeah I love it when he’s back. Just catching up with him, happy to see he’s in good spirits. It’s like connecting with an old friend.” — James to the media today.