Draft Review: Ben Roethlisberger, the QB from the Other Miami

Home/News/Draft Review: Ben Roethlisberger, the QB from the Other Miami
Previous Next

Draft Review: Ben Roethlisberger, the QB from the Other Miami

“His small-school roots did not prevent Roethlisberger from putting up Hall of Fame numbers.” — Rick Gosselin, SI.com.

From SI.com: Rick Gosselin spent 20 years as the NFL columnist for the Dallas Morning News, including 20 offseasons studying and researching prospects for the NFL draft.

Gosselin has been resurrecting his college scouting reports this summer for a look back at how NFL talent evaluators viewed draft prospects. Next up is Ben Roethlisberger, a small-school player with big-time NFL production: 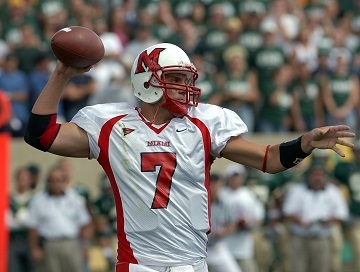 GOSSELIN DRAFT ANALYSIS: Roethlisberger was captain of his baseball, basketball and football teams at Findlay (Ohio) High School and was named the state’s Offensive Player of the Year as a senior when he set Ohio passing records for yards (4,041) and touchdowns (54) in a season.

But he only played quarterback that one season, moving behind center in 2000 after three years at wide receiver. As a result, he was late to the recruiting game and wound up playing his college ball at Miami (Ohio). He started there each of his first three seasons before deciding to skip his senior year to turn pro. But along the way Roethlisberger became the school’s all-time leading passer and just the 30th quarterback in NCAA history to throw for 10,000 career yards.

His best game was a 525-yard, four-touchdown performance against Northern Illinois in 2003. When scouts evaluate small-school quarterbacks, they look at the game tapes against the higher levels of competition. Roethlisberger threw two TD passes against Michigan in 2001 and three against Iowa in 2002. He measured 6-4 ½, 241 pounds at the NFL scouting combine and clocked a 4.81 40-yard dash.

Gosselin placed Roethlisberger No. 11 on his Top 100 board, the second quarterback behind Eli Manning, just ahead of Phillip Rivers at 12. The Pittsburgh Steelers claimed Roethlisberger with the 11th overall pick of the 2004 draft.

Here are comments on Roethlisberger from 10 talent evaluators leading up to his draft:

Personnel director: Had trouble against Iowa adjusting to the speed of the game. He’ll struggle a bit adjusting to our game. His improvements will come in spurts.

Quarterback coach: Has the best arm but he sprays it all over the yard.

Offensive coordinator: I was more impressed with his game tape than his combine. I wanted to see this big, powerful gun but didn’t. But watch the tape and the guy’s a player. He jumps off the film at you. He has more physical potential than any of them. But he’s not as far along as Manning, Rivers, (Matt) Schaub or even (J.P.) Losman. They all know why they do things. Ben’s not there yet. He has the best arm of all of them but he’s not as accurate as you’d like. You’re gambling with him, betting on the come. Not ready to step in and take over right now.

Head coach: He lit it up at our individual workout. He’s the least ready to play right now but two years from now may be the best of the bunch.

HALL OF FAME RESUME: Manning went first overall in the 2004 NFL draft and Rivers fourth. Both are now retired while Roethlisberger plays on for the Steelers, entering his 17th season in 2021. He ranks seventh all-time in passing yardage with 60,348 and eighth in touchdown passes with 396. If he throws for 4,000 yards this season, he’ll pass Dan Marino and Rivers and move into fifth place all-time in yardage. Interesting that because of his small-school background Big Ben was supposed to take longer to hit the field and develop than either big-schoolers Manning (Mississippi) or Rivers (North Carolina State). But Roethlisberger won NFL Offensive Rookie of the Year honors in 2004 when he won all 13 of his regular-season starts to take the Steelers to the AFC championship game. He went to six Pro Bowls but was not selected in 2018 despite having his best season, passing for a league-leading 5,129 yards and 34 touchdowns. He also led the league in passing yards in 2014 with 4,952. More importantly, Roethlisberger has won 67.7 percent of his career starts with eight AFC North titles and two Super Bowl rings.


You can read more about Mr. Gosselin’s resume here.