Home/News/“I want to be here!”
Previous Next

More from Ben’s interview with Mike Prisuta at Steelers.com: 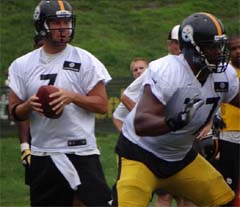 The Steelers organization and the franchise quarterback are on the same page as it relates to Ben Roethlisberger’s immediate and long-term future.

And Roethlisberger doesn’t want to envision one.

“That’s always been what I’ve said, too,” Roethlisberger acknowledged this afternoon at Saint Vincent College. “I said it last year when the erroneous NFL Network reports came out (about Roethlisberger being unhappy in Pittsburgh and being expected to ask the organization to explore possibilities of a trade in the offseason).

Steelers President Art Rooney II reiterated on Friday the team’s “intent” to sign Roethlisberger to a long-term contract extension after the upcoming season, and he said the Roethlisberger camp has been informed of the Steelers’ plans.

It’s an arrangement with which Roethlisberger is more than happy to take his chances.

“Every time you step on the field it’s a gamble, whether you’re in a contract year or you just got a contract or whatever, because it’s a very violent, physical sport. But you know what? We play it, we know the risk. We just go out and give it everything we have.

“We can’t worry about getting hurt or playing safe. I’m not going to get rid of the ball any quicker this year because I’m thinking about not getting hurt. I’m going to give it everything I have like I always do.”

If things eventually work out as Roethlisberger and the Steelers plan, he will have started and would ultimately finish his career with the same franchise.

“I love Pittsburgh, it’s home for me, and I don’t want to go anywhere else.”


*Thank you to fan Marilyn McClellan for the photo! 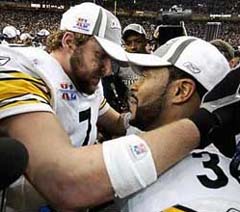 Both from former Steelers RB Jerome Bettis, via ESPN.com –

“I don’t believe that Ben falls short in the leadership department. You don’t win a championship with a lack of leadership.”