“It’s tough because it’s a mixed feeling type of thing: You’re happy to get the win, but you’re disappointed the way the offense played. I think that’s what team’s all about. The defense stepped up huge today.” — Ben, during his post-game comments.

But the Pittsbugh Tribune-Review‘s Dejan Kovacevic says it doesn’t have to be: 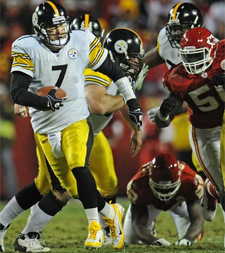 Only John Harbaugh could take a Gatorade bath after this one.

The Steelers stumbled, stutter-stepped and struggled to put away an eminently willing Kansas City victim Sunday night at Arrowhead Stadium. It was awful to watch on every level. But we also know by now how it turns out: Ben Roethlisberger keeps plugging away, the backups admirably step up for injured starters, the defense makes the big stop, and everyone exhales.

Come on, tell me you weren’t nervous that Tyler Palko would go 70 yards there at the end.

Hey, feel free to mail any complaints to the winners, care of “Best Team in the AFC.”

But debate style vs. substance all you want. Bottom line is that the Steelers’ 8-3 record is tied for best in the conference with Baltimore, Houston and New England. And their destiny remains in their control, with their five remaining games including two against Cleveland, one against St. Louis.

Rather than agonizing over Sunday night, maybe it’s more appropriate to ask this: Why shouldn’t the Steelers return to the Super Bowl?


You can read the rest of Mr. Kovacevic’s column here.